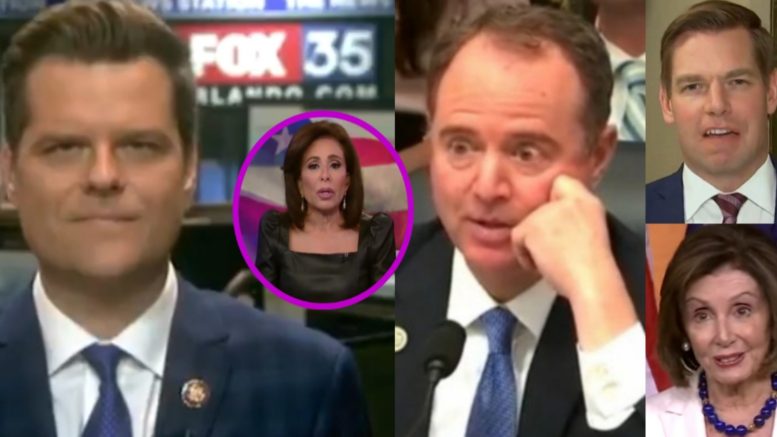 Now that the public impeachment hearings have all wrapped up, Congressman Gaetz thinks Democrats are facing some “major problems” as they have now switched to the phase of trying to convince the American people that their case for impeaching President Trump is justifiable.

Related Article: Senator Scott: “No Way In The World The Senate Can Act & Convict The President Of Impeachment”

“There are two major problems with the Democrats’ case,” Gaetz declared. “So much of it is built not on what people observed, but what the presumed, what they felt, what they believed.”

“That’s not actual evidence and it’s certainly not the basis to overturn the results of a presidential election in this great country,” he said.

“The second problem the Democrats have is that this is all really routed in a policy disagreement,” Gaetz said.

“A lot of these folks who work as the State Department, who work in our diplomatic corps — they have a very establishment way of thinking about the world,” he proclaimed. “Donald Trump, love him or hate him, is not traditional. He has a different style, a different approach, he uses different tools. And that also is not the basis for impeachment.”

“So, I think at the end of the day, you have a country who overwhelmingly believes in the economic agenda of this President. I saw a new Gallup Poll showing that 57% of the American people are supporting President Trump’s economic agenda and, I think, the Democrats focused on all this garbage really look bad in comparison,” Gaetz said. Video Below

.@RepMattGaetz reacts to the latest in the impeachment inquiry: pic.twitter.com/bnxN8muE4G

Volodymyr Zelensky Releases Video, Vows to Defend Ukraine’s Independence: ‘We are all Here’