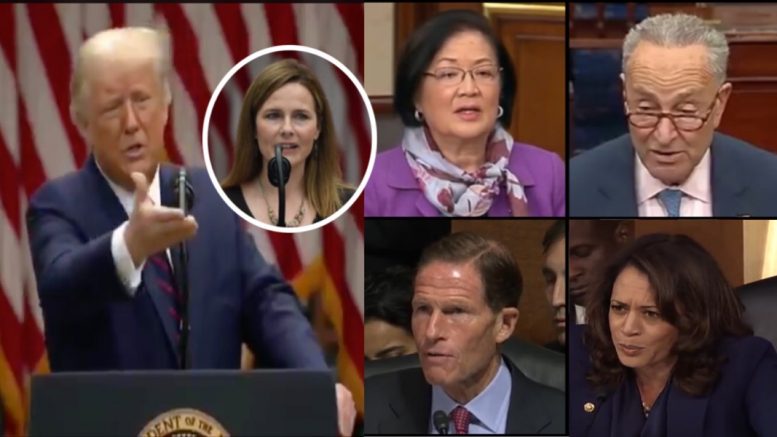 Before Supreme Court Justice nominee Barrett formally introduced herself, the Commander in Chief urged lawmakers and the media to “refrain from personal and partisan attacks”, and also recommended that Senate Democrats provide Judge Barrett with a “respectful and dignified hearing that she deserves”.

“Amy Coney Barrett will decide cases based on the text of the Constitution as written,” the president said Saturday. “As Amy has said, ‘Being a judge takes courage’. You are not there to decide cases as you may prefer, you are there to do your duty and to follow the law wherever it may take you. That is exactly what Judge Barrett will do on the U.S. Supreme Court.”

“Judge Barrett was confirmed to the Circuit Court three years ago by a bipartisan vote. Her qualifications are unsurpassed, and her record is beyond reproach,” he continued.

“This should be a straightforward and prompt confirmation. It should be very easy,” President Trump said, as he pointed to Senators in the audience, which prompted some laughter. “Good luck. It’s gonna be very quick. I’m sure it will be extremely noncontroversial. We said that the last time, didn’t we?”

“I further urge all members of the other side of the aisle to provide Judge Barrett with the respectful and dignified hearing that she deserves, and frankly, that our country deserves. I urge lawmakers and members of the media to refrain from personal or partisan attacks,” he recommended. Continued Below

“The stakes for our country are incredibly high. Rulings that the the Supreme Court will issue in the coming years will decide the survival of our Second Amendment, our Religious liberty, our public safety and so much more. To maintain security, liberty, and prosperity, we must preserve our priceless heritage of a nation of laws. And there is no one better to do that than Amy Coney Barrett,” President Trump expressed.

Following the president’s Supreme Court nomination, Senate Majority Leader Mitch McConnell (R-KY) praised Trump’s Justice pick in a statement, proclaiming, “Judge Amy Coney Barrett is an exceptionally impressive jurist and an exceedingly well-qualified nominee to the Supreme Court. A brilliant scholar. An exemplary judge. President Trump could not have made a better decision.”

Her confirmation hearing before the Senate Judiciary Committee will start in just over two weeks on Oct. 12, as reported by The Hill. The four-day hearing will include one day of opening statements, two days of questions and a final day for outside witnesses. Continued Below

“Judge Barrett is highly qualified in all the areas that matter – character, integrity, intellect, and judicial disposition. She is an outstanding #SupremeCourt nominee by President @realDonaldTrump,” Senator Lindsey Graham (R-SC) tweeted Saturday.

“As the Chairman of the Senate Judiciary Committee, I’m very committed to ensuring that the nominee gets a challenging, fair, and respectful hearing. We move forward on this nomination knowing that the President has picked a highly qualified individual who will serve our nation well on the highest court in the land,” he added in his statement.

Graham is expected to formally announce the schedule during an interview on Fox News on Saturday night, The Hill reported. Video Below

President Donald Trump on urging lawmakers and the media to give Judge Amy Coney Barrett “the respect and a dignified hearing that she deserves”:

President Trump: "I further urge all members of the side of the aisle to provide Judge Barrett with the respectful & dignified hearing that she deserves, & frankly that our country deserves.

I urge lawmakers and members of the media to refrain from personal & partisan attacks." pic.twitter.com/dWKyxfyCbD