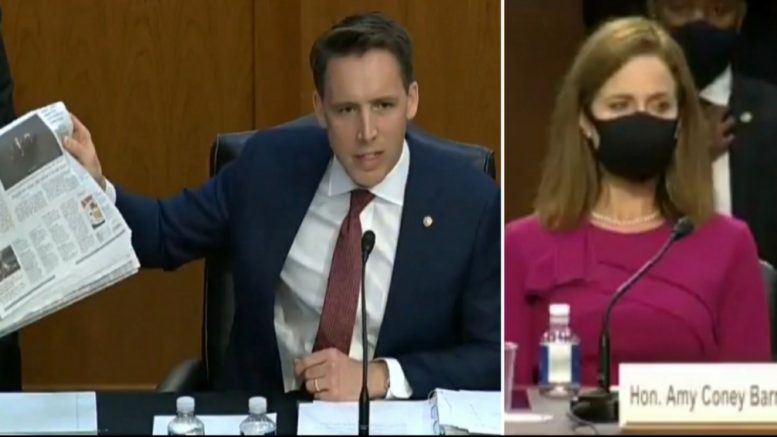 Senator Josh Hawley (R-MO) called out Democrats and forces of the left for trying to “bring back the days of the days of the religious test” and applying it to Judge Amy Coney Barrett.

Left-leaning media sources have already attacked Judge Barrett over her Catholic faith, and it’s expected that Democrats on the Senate Judiciary Committee will express concern about Barrett’s religious beliefs and question whether or not they will shape her legal rulings.

Sen. Hawley went on to point out that over 65 million Americans are Catholics, while many millions more are “Christians from other persuasions.”

“Are they to be told that they can not serve in public office, that they are not welcome in the public sphere unless the members in this committee sign off on their religious beliefs?” he questioned.

“When you tell somebody that they’re too Catholic to be on the bench, when you tell them they’re going to be a Catholic judge, not an American judge, that’s bigotry,” Sen. Hawley proclaimed.

“The pattern and practice of bigotry from members of this committee must stop, and I would expect that it be renounced,” he concluded. Video Below

.@HawleyMO: Democrats are attempting "to bring back the days of the religious test,” it “must stop”https://t.co/EptKCyeBh0 pic.twitter.com/N4oJBfE0ty