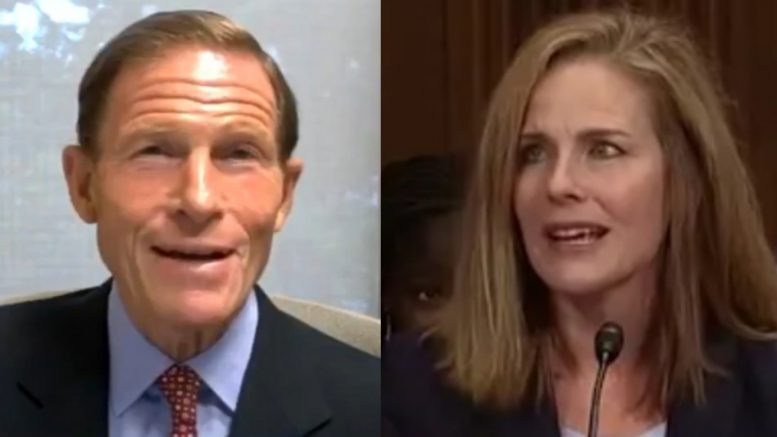 Senator Richard Blumenthal has now signaled that he’s ready to fight and use “every tool possible” to stop Judge Amy Coney Barrett from being confirmed as the next Supreme Court justice.

The Democrat senator made the assertion in wake of President Donald Trump officially naming Judge Barrett as his nominee to replace Ruth Bader Ginsburg on the high court.

“We need to focus on these next days and weeks trying to defeat this nominee,” Blumenthal said while interviewing on MSNBC on Sunday.

“I am going to be fighting…fighting like hell to defeat her using every possible tool,” he added.

While it remains unclear exactly what “tools” Blumenthal intends to use, on Saturday the senator admitted that Judge Barrett’s nomination “may not violate the Constitution” despite calling her nomination “illegitimate.”

After getting called out, Blumenthal admits confirming Judge Barrett doesn’t violate the Constitution.

BLUMENTHAL: It is illegitimate.

CNN: Where does it say that what Republicans are doing is illegitimate in the Constitution?

BLUMENTHAL: It may not violate the Constitution. pic.twitter.com/DwWIOJplLH

In ending, here is a thread of tweets where Blumenthal tries to explain why he opposes Judge Barrett’s nomination and why he will ‘refuse’ to treat the process of confirming her as ‘legitimate.’

Judge Barrett’s views would harm real lives—real people—in real ways, from children with pre-existing conditions to women who just want to be able to decide when & how to have a family. I’m fighting for them.

Judge Barrett has criticized past decisions protecting access to health care, shown hostility to reproductive freedoms, & expressed a willingness to overturn settled Supreme Court precedent that does not align with her extreme views.

I will refuse to treat this process as legitimate & will not meet with Judge Amy Coney Barrett.