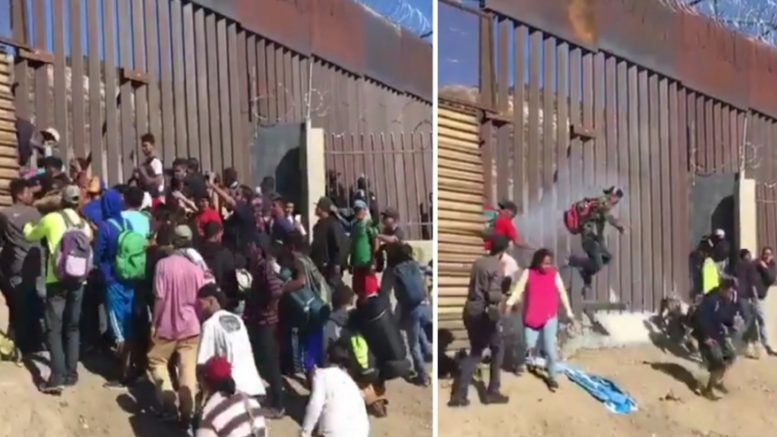 Sunday marked a turning point in the much-hyped Central American caravan that has reached the US border after roughly two months of travel from Guatemala.

Members of United States border control and National Guard are more than prepared to handle thousands of migrants who are determined to illegally cross the border into America in hopes of getting asylum.

For weeks, President Trump has labeled the caravan as “an invasion” and has vowed that the US will protect itself by not allowing migrants in America, unless they follow the normal process of coming into America legally.

He has even repeatedly told them through multiple tweets and on-camera moments to “Go Home!”

On Sunday, however, Migrants ignored calls from the President, banded together & they marched towards the US border from Tijuana, Mexico. And as they attempted to storm the border, they quickly discovered how difficult it will be to gain entry to America as they were met with force.

In a recently surfaced video spread throughout social media, migrants can be seen breaching a section of an outdated barrier, only to be seen darting back out as tear gas was fired upon them. Video Below

Migrants Get Denied After Trying To Storm US Border (Video)

After much preparedness, border control appears to have a handle on the situation. President Trump showed no signs of letting his guard down and encouraged Mexico to act, while blaming the situation on Democrats.

Trump said, “Would be very SMART if Mexico would stop the Caravans long before they get to our Southern Border, or if originating countries would not let them form (it is a way they get certain people out of their country and dump in U.S. No longer). Dems created this problem. No crossings!”

Authorities closed the San Ysidro port of entry near San Diego, California as a result of the caravan pushing to gain entry. If the situation turns worse, Trump says he may have to shut down the entire border.