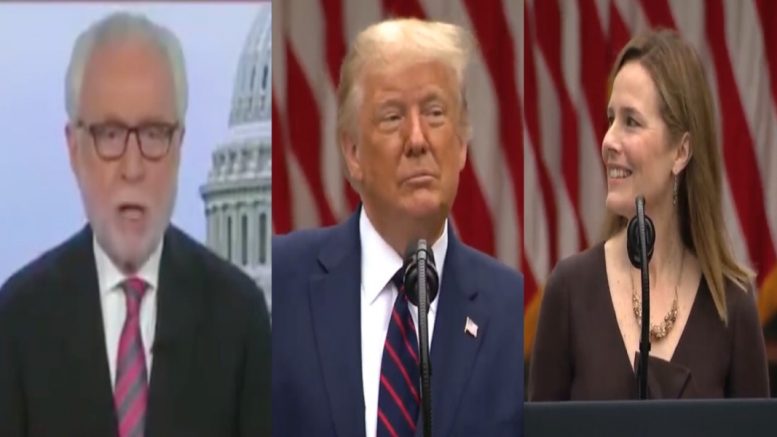 While reporting on the president’s nomination, CNN’s Wolf Blitzer expressed, “Clearly Judge Amy Coney Barrett is highly qualified as a jurist. She has a wonderful, wonderful personal story.”

Meanwhile, Ariane de Vogue, who covers news on the Supreme Court and legal issues for CNN, was shouted down on live TV while she was reporting, by a crowd who was gathered at the Supreme Court in support for Judge Amy Coney Barrett.

Blitzer told the CNN reporter, “Ariane, I want you to stand by. We can barely hear what you’re saying because of the crowd behind you. … Stand by for a moment.” Video Below

During CNN's coverage of President @realDonaldTrump's nomination, a crowd gathered at the Supreme Court yells, "CNN is fake news!" pic.twitter.com/gADLxLbFUW

CNN’s Abby Phillip said that Judge Amy Barrett is “widely viewed to be well qualified for this position… that is going to be a tough thing for Democrats to overcome.”

Barrett is "widely viewed to be well qualified for this position…that is going to be a tough thing for Democrats to overcome." pic.twitter.com/wjQ42WPmYV

Further, former Obama-Biden Acting Solicitor General Neal Katyal said of Barrett: a “qualified nominee” who is “steeped in the law”:

“Thank you very much Mr. President. I am deeply honored by the confidence you have placed in me,” Judge Amy Coney Barrett said on Saturday. “I fully understand that this is a momentous decision for a President and if the Senate does me the honor of confirming me, I pledge to discharge the responsibility of this job to the best of my ability. I love the United States and I love the United States constitution. I am truly humbled by the prospect of serving on the Supreme Court.”

(Related: Sarah Sanders Calls On Americans To ‘Pray’ For President Trump’s SCOTUS Nominee: “The Next Few Weeks Are Going To Be Brutal”)