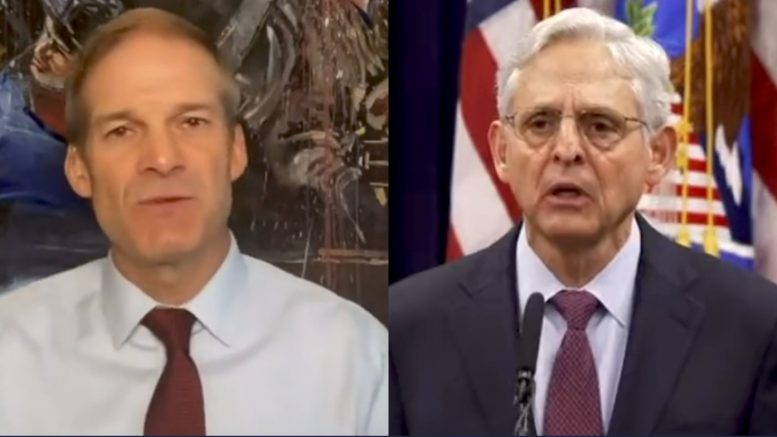 “I think everything’s on the table,” Rep. Jim Jordan replied when asked about the prospects of Attorney General Merrick Garland being impeached if Republicans win back control of the House in November.

Attorney General Garland has endured intense criticism for not enforcing federal law after pro-choice protesters conjured outside of the homes of Supreme Court Justices prior to Roe v. Wade being overturned. The Biden Administration encouraged protesting outside of Supreme Court justices’ homes after the abortion decision was leaked before being announced by the high court. Garland’s DOJ, meanwhile, failed to bring any charges against protesters who targeted the justices’ homes, even after the alleged assassination attempt against Justice Brett Kavanaugh, Fox News reported.

“If the country gives us the majority in the House, I think everything should be on the table,” Rep. Jordan told Newsmax’s Rob Schmitt as he cited 18 US Code 1507 on picketing and parading, which states:

Whoever, with the intent of interfering with, obstructing, or impeding the administration of justice, or with the intent of influencing any judge, juror, witness, or court officer, in the discharge of his duty, pickets or parades in or near a building housing a court of the United States, or in or near a building or residence occupied or used by such judge, juror, witness, or court officer, or with such intent uses any sound-truck or similar device or resorts to any other demonstration in or near any such building or residence, shall be fined under this title or imprisoned not more than one year, or both.

“When it comes to the attorney general, just go back to this issue: You have a statute on the book that says if protesters are at Supreme Court justices’ homes, trying to impact and influence a decision, that is against the law — 18 USC Section 150 — and he refuses to prosecute any of these protesters, confirming something that I think is very scary,” Rep. Jordan said.

“We now have one of the key agencies in the executive branch joining in the effort to intimidate a seperate and equal branch of government, the judicial branch. That is scary when that kind of stuff goes on, but that is certainly what it looks like,” he added. Video Below

.@Jim_Jordan says everything‘s on the table when it comes to impeaching Merrick Garland.

He also responds to Adam Schiff‘s amendment that would cover up information. pic.twitter.com/CUKra7eXCC