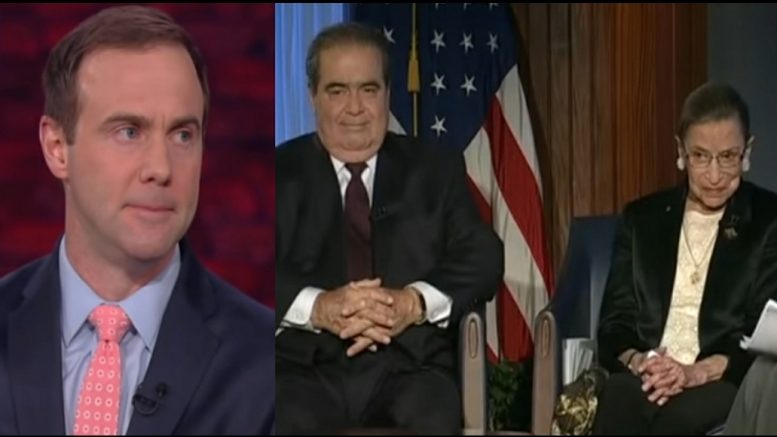 Despite having sharp differences of view, Justice Scalia and Justice Ginsburg shared a close friendship outside of the chamber, according to a couple of “passages” Chrisopher Scalia posted to his Twitter account on Friday.

Related Article: Cruz On Why The Senate Should Confirm A Successor For Ginsburg By Election Day: “We Are One Vote Away From Losing Our Fundamental Constitutional Liberties”

“I’m very sad to hear about the passing of my parents’ good friend, and my father’s wonderful colleague, Justice Ginsburg. May her memory be a blessing. I’d like to share a couple of passages that convey what she meant to my dad,” Scalia wrote.

I'm very sad to hear about the passing of my parents' good friend, and my father's wonderful colleague, Justice Ginsburg. May her memory be a blessing. I'd like to share a couple of passages that convey what she meant to my dad…/3

The first story is a quote that Justice Scalia delivered at roast to celebrate the 10th anniversary of Ginsburg being on the DC Court of Appeals.

This is from a roast he delivered for her 10th anniversary on the DC Circuit Court of Appeals. They'd been colleagues on that court until he went to the Supreme Court; she hadn't joined him there yet—and he missed her. pic.twitter.com/rrgFfNlvJL

The second story involved a time when Scalia bought two dozen roses for Ginsburg on her birthday.

When asked by a fellow judge why he would buy the roses for Ginsburg, when they often vote opposite on court cases, Scalia said, “Some things in life are more important than votes.”

This is a story that Judge Jeffrey Sutton shares about an encounter late in my dad's life, when he bought his friend Ruth two dozen roses for her birthday. "Some things in life are more important than votes." pic.twitter.com/wjCJvFcdHm

In response to the stories Christopher Scalia shared, former Arkansas governor Mike Huckabee summarized what Americans can learn from the Scalia/Ginsburg friendship.

I believe @cjscalia says it best that Justice Ginsburg and Justice Scalia taught us all that sharp differences of view don't have to destroy honest & sincere respect and friendship. Sincere condolences to the family of Justice Ginsburg. https://t.co/Wvbe8BYAq7

In ending, here is Laura Ingraham discussing the “unlikely” friendship of Scalia and Ginsburg: