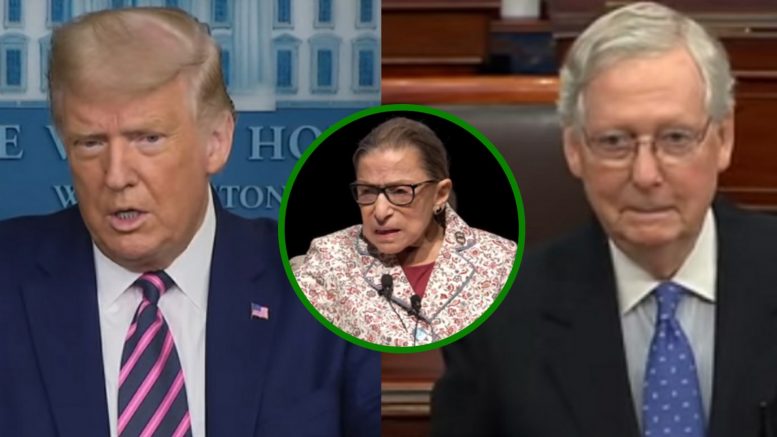 President Donald Trump issued a message directed towards Republicans, signaling he is ready to move forward on the process of selecting a Supreme Court Justice to replace Ruth Bader Ginsburg, who passed away on Friday.

The statement by Trump, which was posted to his Twitter account on Saturday, reminded GOP Senators that it is their “obligation, without delay” to get the process moving on installing a new Supreme Court Justice because those who voted them into power are depending on it.

Trump tweeted: “@GOP We were put in this position of power and importance to make decisions for the people who so proudly elected us, the most important of which has long been considered to be the selection of United States Supreme Court Justices. We have this obligation, without delay!”

The statement by Trump echoes that of Senate Majority Mitch McConnell and Republican Senator Ted Cruz, who have both voiced interest in moving to fill the Supreme Court vacancy rather quickly.

“Americans reelected our majority in 2016 and expanded it in 2018 because we pledged to work with President Trump and support his agenda, particularly his outstanding appointments to the federal judiciary. Once again, we will keep our promise,” the McConnell said in a statement. “President Trump’s nominee will receive a vote on the floor of the United States Senate.”

Senator Cruz, who fears a four-four split court as the country moves closer to the 2020 election, said, “We are one vote away from losing our fundamental constitutional liberties and I believe that the President should, next week, nominate a successor to the Supreme Court. It is critical that the Senate takes up and confirms that successor by Election Day.”

The President was saddened upon learning of Ginsburg’s passing after reporters broke the news to him after his rally in Wisconsin.

We leave you with the President’s initial reaction as well as his official statement regarding Ginsburg’s death:

Bongino On Graham Lacking ‘Desire’ To Subpoena Schiff’s Phone Records: “Enough Of This BS. Take The Gloves Off Already!”