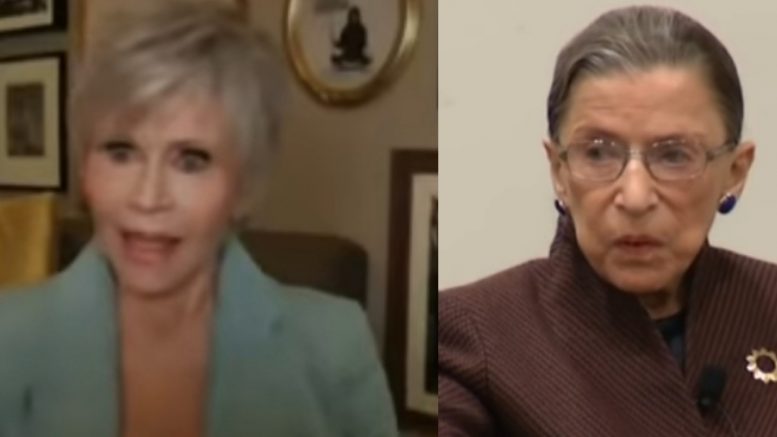 Fonda must have been so fed up during her interview that she made it a point to urge Democrat politicians to not allow Republicans “to do one frickin’ thing” when it comes to trying to replace Gingsburg before the 2020 election results are tallied.

The actress made reference to the McConnell rule, which held up Obama’s Supreme Court nominee Merrick Garland from being confirmed just before the 2016 election.

“McConnell held up then-President Obama’s SCOTUS nomination of Merrick Garland in 2016, citing the ‘Biden rule’ — made by the then-senator in 1992 about not confirming justices during an election year, particularly when the Senate is controlled by the opposing party. In a statement Friday evening, the Senate majority leader announced his intent to proceed with the confirmation process, despite the November election being just weeks away.”

“I’m still reeling, Bill,” Fonda is quoted as telling Bill Maher. “I just heard that Ruth Bader Ginsburg died. We have to be as tough as Mitch McConnell and not allow them to do one frickin’ thing until the election results.”

“I mean, we have to rise up and not allow them to do it. If Mitch McConnell can do it, let’s get some — grow some b—s and ovaries,” she added.

The only problem with what Fonda is suggesting is that back in 2016, a Democrat (Obama) was President when Republicans held the Senate majority…in other words, the McConnell rule helped squash a Democrat-nominated Supreme Court nominee’s chances of being confirmed during the election cycle because it was in the majority’s best interest.

Fast-forward to 2020, and now you have a Republican President on the verge of deciding on who to nominate as the next Supreme Court Justice, along with a Republican majority Senate to confirm the selection. Politics is politics.

Perhaps if the tables were turned back in 2016 and Obama had a Democrat-majority Senate to confirm Garland, Jane Fonda would have been okay with it. Continued Below

In endingn here is a tweet posted by another former Hollywood sensation James Woods, who covered the legal process of selecting a Supreme Court nominee:

“[The President] shall nominate, and by and with the Advice and Consent of the Senate, shall appoint Ambassadors, other public Ministers and Consuls, Judges of the Supreme Court, and all other Officers of the United States.” There are no other qualifiers in the Constitution.