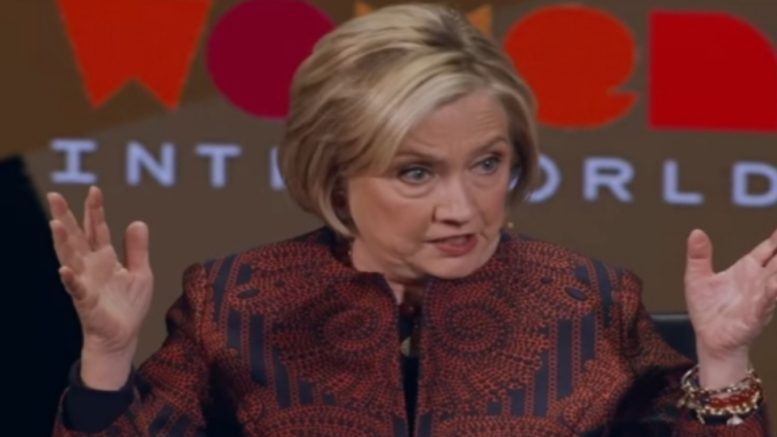 Hillary Clinton returned back into the spotlight in recent days, as she has ramped up attacks against President Trump and his Administration.

On Friday, Hillary compared the current status of the Mueller report to “a Twilight Zone,” and claimed Attorney General William Barr would rather protect President Trump than the rule of law.

Then on Monday, Hillary used Tax Day to attack the IRS and Department of Treasury for not releasing President Trump’s taxes, as demanded by House Democrats.

Hillary said, “Millions of Americans will put tax checks in the mail today. Meanwhile, the secretary of the treasury and head of the IRS continue to refuse to turn over Trump’s tax returns to Congress for reasons even they can’t clearly articulate. #TaxDay”

She may have gotten ahead of herself in this particular attack, however, as Twitterverse responded to Clinton with a vengeance.

There were mixed reactions to her remarks, but the highest engaged comments did not bode very well for Hillary. In fact, it actually reopened the can of worms that entails her missing 33,000 emails.

Related Article: WH Chief Of Staff Explains Why Democrats Won’t Ever Obtain Trump’s Taxes: ‘This Is A Political Stunt’

Down below, we have compiled some of the best-received replies to Hillary’s statement.

Did you email yours?😂

Weaponizing IRS for political purposes is unAmerican & should be against the law, just as is obstructing justice by destroying subpoenaed emails, hard drives, cell phones, etc. you got lucky as your corrupt friends looked the other way. Seems you should sit down and be quiet.

what difference does it make? @realDonaldTrump won and you lost, @Democrats have put out country in bankruptcy with hoaxes, farcical and scam programs #WeThePeople have had enough of propaganda, lies, cheaters who are incompetent and can't do their jobs #WalkAway @POTUS won