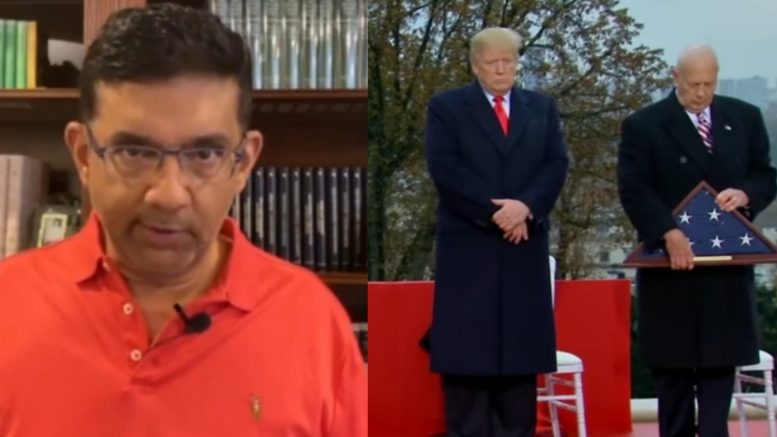 Dinesh D’Souza provided a detailed explanation about why he knows The Atlantic magazine’s negative story about President Trump is completely “made up.”

Citing “anonymous sources,” The Atlantic reported that President Trump cancelled a planned 2018 trip to a cemetery in France for American marines who died in World War I because of disdain for the slain soldiers who are buried there, and he allegedly referred to them as “losers” and “suckers.”

In response, Dinesh D’Souza tweeted a video where he provided multiple notions that pull the overall credibility of The Atlantic’s piece into question.

The timing of the article is among the most “highly suspicious” indicator that should cast doubt on the story, according to Dinesh, as he captioned his video, “If Trump made wildly insulting remarks about the US military two years ago, why did no one say anything until now? That’s just one reason we know the story is completely made up.”

“Just as with the Kavanaugh #MeToo accusation, the timing is highly suspicious,” Dinesh said in his video. “Trump supposedly made these wildly insulting remarks 30 months ago — over two years ago. Apparently people heard him say it. All of them were silent about it. Now, 60 days before the election, they’re all speaking up. That by itself is suspicious.”

D’Souza brought up that President Trump “reveres the military” and goes “above and beyond” for them, which is “completely inconsistent” to what The Atlantic’s story suggests.

“[President Trump] goes out of his way to praise the military,” Dinesh said. “I haven’t seen a president since Reagan so close to the military.”

Dinesh then turned to accusations made by “anonymous sources” in The Atlantic’s article.

“Notice that the sources are anonymous and they all don’t say the same thing,” he said. “Compare the anonymous sources with a named source, John Bolton who was there, and who specifically says Trump didn’t say it. He gives a full account of the incident, ‘Trump never said it.’ Bolton says if Trump had said it, he would have written a whole chapter on it. John Kelly, who was also there with Trump, won’t confirm the allegations. He’s no friend of Trump, but he probably would have had the allegations been true.” Video Below

If Trump made wildly insulting remarks about the US military two years ago, why did no one say anything until now? That’s just one reason we know the story is completely made up. pic.twitter.com/6UJXkdVSrW