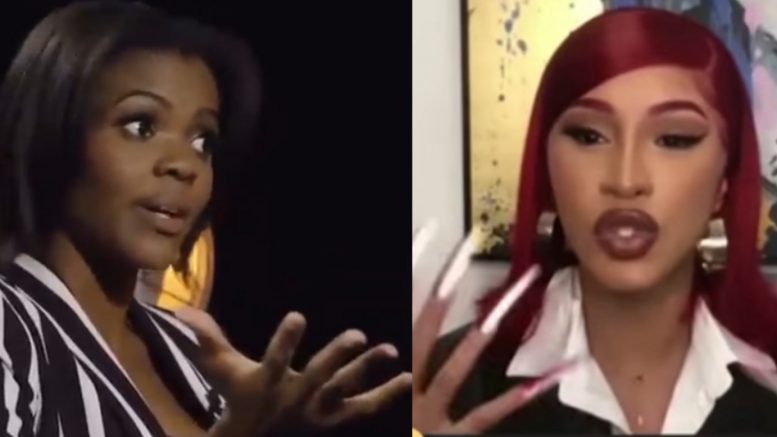 On Sunday, conservative commentator Candace Owens and liberal rapper Cardi B went head to head on Twitter after Candace tweeted a video where she voiced agreement with Ben Shapiro that Black people should be “insulted” over Joe Biden’s interview with Cardi B.

“I completely agree with your assessment about Cardi B. It is one of the biggest insults,” Candace is seen telling Shapiro as she said that Black Americans should be “insulted by the fact that Joe Biden, who has been hiding in his basement,” made time to come out and interview with Cardi B of all people, who she labeled as “illiterate.”

Candace went on to accuse Cardi B of helping Joe Biden “pander” to the Black community, which she implied was the sole reason behind the interview in the first place.

Since most black people didn’t have the spine to admit that @benshapiro was 100% correct about @iamcardib and how her music and platform contributes to the disintegration of black culture and values…here you go. #WAP #SundaySpecial pic.twitter.com/q5QxxX9G4e

As a result, Cardi B lashed out at Candace Owens, in what was the beginning of an extended Twitter battle between the pair, that carried over to Instagram.

At one point, Candace referenced Cardi B’s hit song “WAP,” when she said, “I’m almost 6 months pregnant and had to rip @iamcardib a new WAP.”

I’m almost 6 months pregnant and had to rip @iamcardib a new WAP.

Candace fired back and called out Cardi B for bringing an unborn child into the argument.

“Attacking an unborn child. How very DEMOCRAT of you,” Owens tweeted. “While I have you—did you know your party has supported the slaughter of over 18 million black babies since 1973? Did you know the most unsafe place for a black child is in its mother’s womb because of YOUR party?”

Attacking an unborn child.
How very DEMOCRAT of you.

While I have you—did you know your party has supported the slaughter of over 18 million black babies since 1973? Did you know the most unsafe place for a black child is in its mother’s womb because of YOUR party? https://t.co/hEJ8HR0ZRg

Candace capped things off by tweeting a video of Malcolm X and tied it to Cardi B’s interview with Biden.

Malcolm X warned us years ago about the puppetry of interviews like Cardi B and Joe Biden.

He always spoke out against the white liberal game of using entertainers as pawns.

This isn’t really about you, @iamcardib. This is about black America waking up to Democrat racism. pic.twitter.com/Ap7WeZL6B5

In ending, here are a couple of Candace’s bold throwdown’s directed at Cardi B:

1) Produce the clip of Trump laughing at black men getting killed, you lying fraud.
2) I turned down filming a spot for the RNC convention.
3) You encourage millions of young girls to spread their legs, & you admitted to date-raping men—so don’t even start on the bleach lie. https://t.co/ZMW2CdPM3k