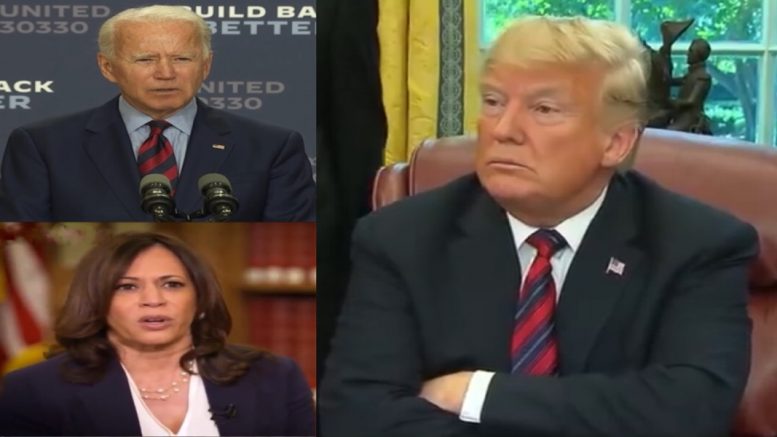 Multiple public health experts, including Dr. Anthony Fauci, have been saying for months that Operation Warp Speed is free from political interference and that they would take the vaccine as soon as it is ready, according to a press release from the Trump campaign.

(Related: Hundreds Of Trump Supporters Line Up To Greet The President Upon His Arrival To Vaccine Factory)

“You going to be the first one to say– ‘Put me, sign me up’, they now say it’s okay? I’m not being facetious,” he claimed. Video Below

Joe Biden is ignoring Dr. Fauci and other experts and deliberately trying to undermine confidence in the coronavirus vaccine here.

Legit question from this: does Biden believe Americans shouldn't get the vaccine when its ready? pic.twitter.com/AgEGQeL3UE

During a Saturday interview on CNN’s “State of the Union”, host Dana Bash asked Kamala Harris if she would take the vaccine once it’s approved, but Harris claimed to “not trust Donald Trump”.

“Let’s just say there’s a vaccine that is approved and even distributed before the election. Would you get it?” Bash asked Harris.

“Well, I think that’s going to be an issue for all of us. I will say that I would not trust Donald Trump,” Harris said. “I will not take his word for it.”

BASH: "Let’s just say there’s a vaccine that is approved and even distributed before the election. Would you get it?"

HARRIS: "Well, I think that’s going to be an issue for all of us. I will say that I would not trust Donald Trump… I will not take his word for it." #CNNSOTU pic.twitter.com/jhxtdvaMF1

Despite what Dr. Fauci and other public health experts say about the coronavirus vaccine, Biden and Harris are spreading fear and conspiracy theories because they care more about politics than saving lives. pic.twitter.com/NZKUkqeNdM

The Trump campaign said in a Sunday press release:

Biden and Harris are saying this for political reasons, knowing full well their irresponsible rhetoric could lead to more dead Americans. They don’t seem to care that they are contradicting the scientists and top public health officials:

“Instead of listening to the experts, Joe Biden and Kamala Harris are playing politics with people’s lives. Instead of getting rid of the virus, they’d rather undermine American’s confidence in a vaccine and shut down the economy again just because they hate President Trump. Why would we ever let Biden kill countless American businesses, jobs and our economic future when President Trump’s great American comeback is underway?”

President Trump is keeping his promise to develop and provide a safe, effective coronavirus vaccine!pic.twitter.com/r86s26c1PL