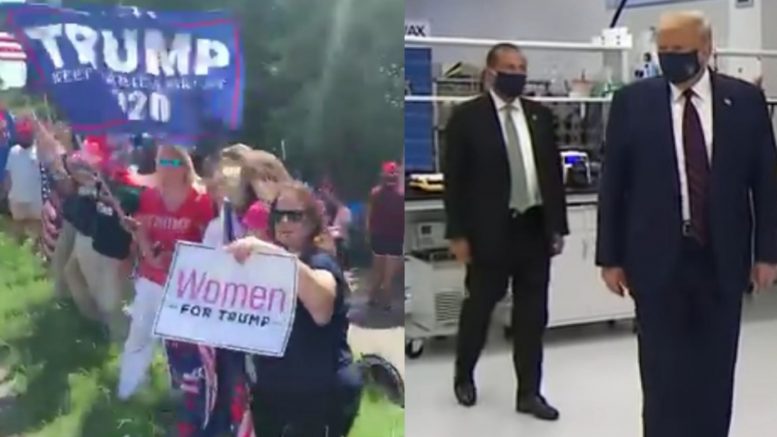 Hundreds of Trump supporters in North Carolina lined up to greet the President with a warm welcome before he visited a factory that is in the process of developing a coronavirus vaccine.

In a video posted to social media, supporters are seen wearing their favorite Trump gear, holding signs and waving flags along the route that President Trump was expected to take.

The heat index was 102 degrees, according to the states’s campaign director, but that didn’t deter campaign volunteers from lining up to greet their Commander-In-Chief.

100s of our volunteers started gathering at 1:00PM in a 102 degree heat index to welcome President @realDonaldTrump. #NorthCarolina is ready for #FourMoreYears! pic.twitter.com/0PT8n9z0il

Here’s another view of the crowd in a quick fast-forwarded clip:

Upon his arrival, President Trump was spotted inside the factory wearing a face mask. It was the second time he has been seen in public donning a mask.

At his press briefing afterwards, Trump said that he thinks “a lot of the governors should be opening up states that they are not opening, and we will see what happens.”

He later said, “We are mass-producing all of the most promising vaccine candidates in advance so that on the day one that it’s approved, it will be available to the American people immediately and will probably have a lot for a lot of other people throughout the world. The world is suffering from this China virus.” Video Below

Here is video of President Trump touring the vaccine factory in North Carolina:

Sen. Graham Warns McConnell Over His Rhetoric Against Trump: “He Is Giving Some Legitimacy To This Impeachment Process”