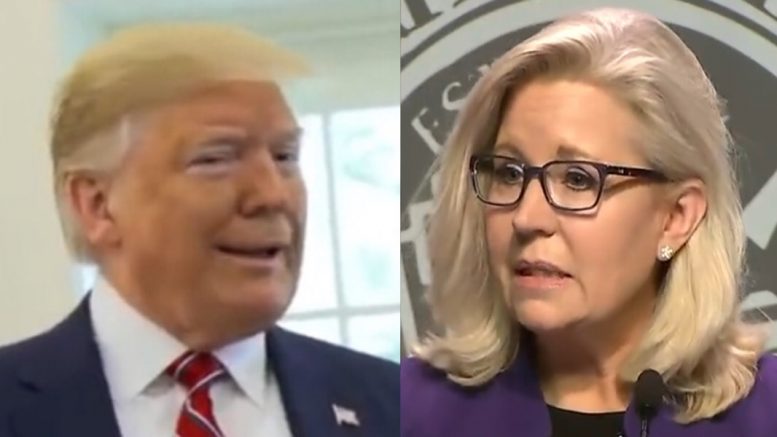 45th President Donald J. Trump issued a statement on Wednesday via email from his “Save America” PAC, mocking Rep. Liz Cheney after the Wyoming Republican, during a speech in New Hampshire, alleged Trump is a “domestic threat” who wants to “unravel the foundations of our constitutional republic.”

Trump, in his statement, fired back at Cheney, highlighting her low approval rating and calling her a “threat to Free and Fair elections” after she has rejected election irregularities found since Joe Biden has taken office.

With an approval rating at 19% in Wyoming, people are wise to Liz Cheney.

She is a threat to Free and Fair elections, which are the cornerstone of our Country, because she caved so easily on the Crime of the Century.

She is happy to join the Democrats in the Unselect Committee (the next RUSSIA, RUSSIA, RUSSIA Hoax), and spread more of their lies. Cheney is far more unpopular than her father, who just lost his position as the least popular Vice President in American history to Kamala Harris. Democrats would never put up with a Liz Cheney in their ranks.

If we had a Free and Fair media, instead of a corrupt media, those election results would never have been allowed to happen. The proof of irregularities and fraud is massive! Continued Below

The 45th President’s statement came a day after Rep. Cheney delivered remarks during an event in New Hampshire. In her speech, she claimed Trump is a danger to both the GOP and the United States and appeared to criticize Republican leaders who support the former president.

“Political leaders who sit silent in the face of these false and dangerous claims are aiding a former president who is at war with the rule of law and the Constitution,” she said. “When our constitutional order is threatened, as it is now, rising above partisanship is not simply an aspiration. It is an obligation.”

“We are also confronting a domestic threat that we have never faced before: A former president who’s attempting to unravel the foundations of our constitutional republic, aided by political leaders, who have made themselves willing hostages to this dangerous and irrational man,” Cheney alleged. Continued Below

.@RepLizCheney: "We are also confronting a domestic threat that we have never faced before; a former president who's attempting to unravel the foundations of our Constitutional Republic…" pic.twitter.com/dqYSwaP4RH

In an email statement on Tuesday, Trump also ripped the lawmakers on the House committee that are probing the January 6th protest at the Capitol, dubbing them as “politically ambitious hacks”.

“The Unselect Committee of politically ambitious hacks continues to subpoena people wanting to know about those protesting, on January 6th, the insurrection which took place during the Presidential Election of November 3rd,” he said.

“That’s right, the Committee is studying the PROTEST when it should be studying the Fraudulent Election that led to the protest. As the LameStream Media knows, the facts are there for all to see!” the 45th President added. 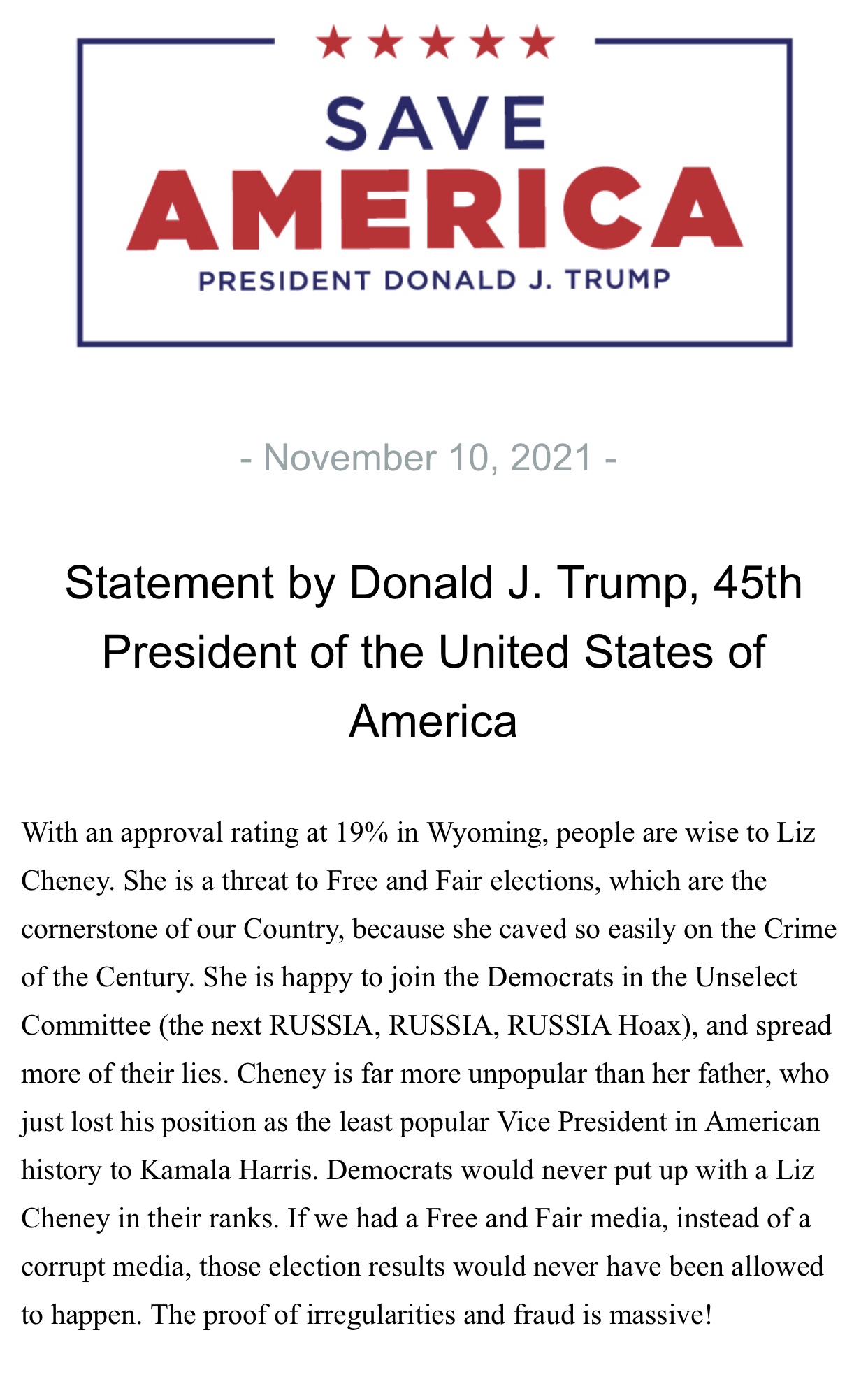 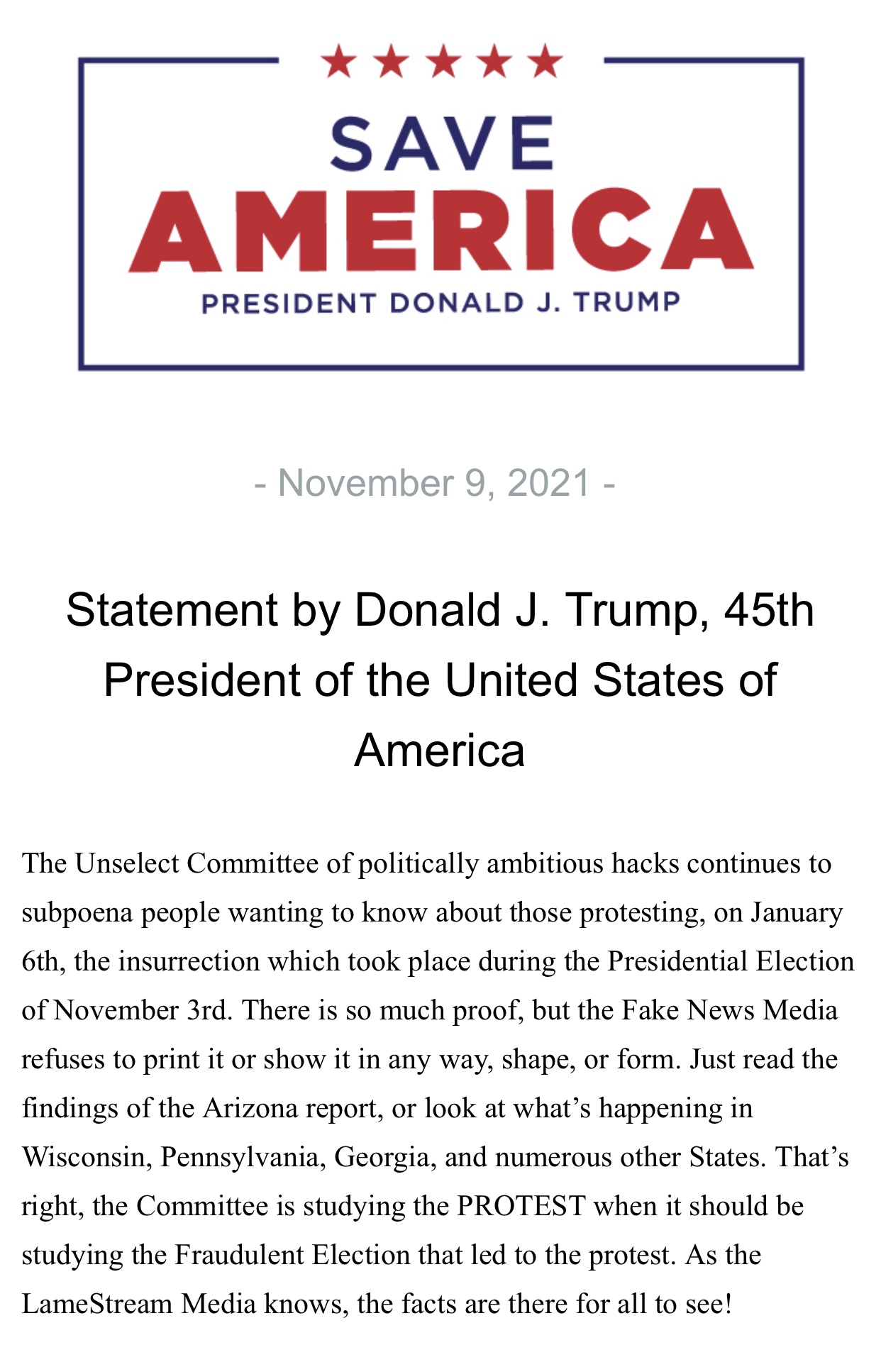 Sen. Rogers On The Maricopa County ‘Leaked Draft’ Report: “Hearing Will Render Findings Of Great Consequence…God Is In Control”