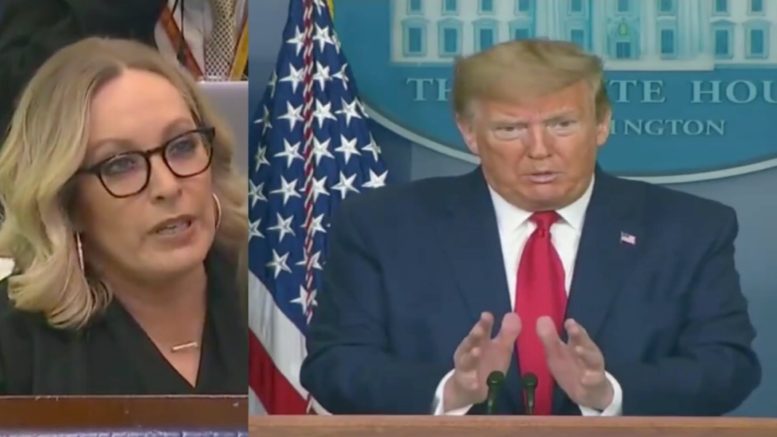 On Saturday, President Donald Trump retweeted a post from Real Clear Politics Paul Sperry, who had written: “Let’s see if authorities enforce the social-distancing orders for mosques during Ramadan (April 23-May 23) like they did churches during Easter.”

During the White House Coronavirus Task Force briefing on Saturday, the president was asked about the tweet, and he defended Christianity, saying that the “Christian faith is treated much differently than it was”.

The reporter during the briefing, read off Sperry’s tweet and asked the president to respond.

“I would like to see that. I just spoke with leaders and people that love Mosques. They love Mosques and I’m all in favor of that,” the president said.

“But I could say there could be a difference– we’ll have to see what will happen. Because I’ve seen a great disparity in this country. … I’ve seen a very strong anti-Israel bent in Congress with Democrats,” he continued. “It was unthinkable 7 or 8 or 10 years ago. And now, they’re into a whole different thing between [Ilhan] Omar and AOC. I say AOC plus 3, add them on. I mean the things that they say about Israel are so bad.”

“So, I would be interested to see that, because they go after Christian churches, but they don’t tend to go after Mosques. And I don’t want them to go after Mosques’. But I do want to see what their bent is,” President Trump explained. Continued Below

The reporter then asked the president: “Are you suggesting Imam’s wouldn’t follow social distancing?”

“I am somebody that believes in faith,” the president expressed. “And it matters not what your faith is, but our politicians seem to treat differently faiths very differently. And they seem to think– I don’t know what happened with our country, but the Christian faith is treated much differently than it was. And I think it’s treated very unfairly.” Video Below

Trump asked about Social Distancing Enforcement at places of Worship:

“It matters not what your faith is, but our politicians seem to treat different faiths very differently.”

“The Christian Faith is treated much differently than it was, and I think it’s treated very unfairly.” pic.twitter.com/Riq8o2nfs9

As reported by The Blaze:

Last week, the parking lot at Temple Baptist Church in Greenville, Mississippi, was full Wednesday night for a service, the Delta Democrat-Times reported. Temple Baptist members were staying in their vehicles with the windows rolled up to listen to Pastor Arthur Scott’s sermon on the radio, the paper said.

As reported by CBS Chicago 2:

Police in Hammond, Indiana busted up a service at a church Sunday that was defying statewide stay-at-home orders during the coronavirus pandemic. Officers went inside and found 30 to 40 people gathered for Palm Sunday. Some had masks on, but most did not.

The elders were given a ticket for violating the order. And even after that, the service continued as more people walked into the church, police said.