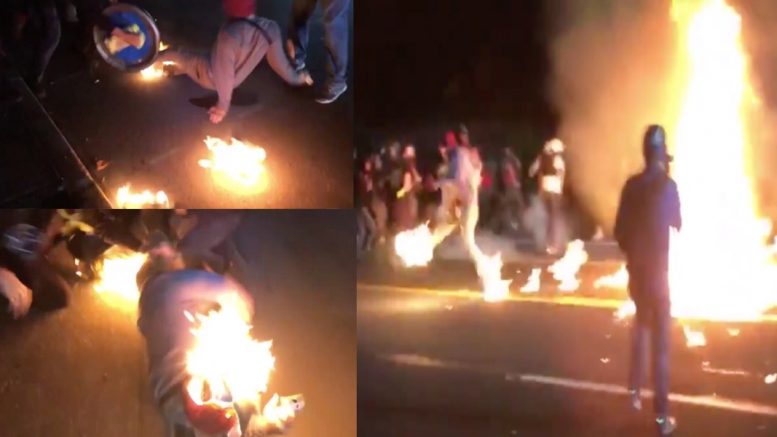 Portland’s 100th night of unrest on Saturday, led to a riot being called as fire bombs, rocks, and mortars were thrown at Portland police officers which also injured at least one community member.

A protester was set on fire by Antifa members who had tossed Molotov cocktails and explosive commercial grade fireworks in residential neighborhoods during the Saturday riot.

A protester can be seen emerging from flames with both of his legs and shoes engulfed in fire. Police officers rushed in to save the man, whose attempts to “stop, drop, and roll” had little effect on the fire.

Graphic: #Antifa rioters throw a Molotov cocktail in direction of police in SE Portland. It lands next to people, setting one on fire. Video by @TaylerUSA. #PortlandRiots pic.twitter.com/NJfEURKfkC

A crowd gathered at Ventura Park and, at about 9:00p.m., began a march in the street toward East Portland Community Policing Center. East Precinct is an active, working police station and has been the target of arsonists, vandals, and violence in past demonstrations. It is directly adjacent to occupied townhomes and across the street from a school and a community event center. Many in the crowd were carrying large shields (photo) and dressed in protective gear including helmets, gas masks, body armor, and all black clothing. It was clear that the intent of the crowd was not peaceful protest. Therefore officers were positioned in such a way that prevented the march from reaching East Precinct, according to a Portland Police Bureau press release.

At about 9:15p.m, as the crowd approached officers, individuals began throwing multiple fire bombs at officers. One of them caught a community member on fire. Officers later located the injured person and Portland Fire and Rescue medics offered treatment. The injured person was later taken to a hospital by private vehicle, per the release.

During numerous confrontations with officers, individuals launched attacks on law enforcement, including throwing objects. A sergeant was directly struck by a commercial grade firework, which burned through his glove and injured his hand. Several officers and troopers were struck by rocks in the head, arms, shoulders, and feet. Only their protective gear prevented serious injury. An Oregon State Police vehicle was damaged by rocks, including broken windows and dents (photos). An unexploded mortar was recovered by police, Portland Police Bureau reported. Video Below

There were 59 people arrested during the riot that took place Saturday night and Sunday morning. Forty-three were processed by the Portland Police Bureau.

Graphic: Another angle of the person being set on fire by a Molotov cocktail thrown by antifa militants in SE Portland. Rioters try to help but don’t do much. Cops are the ones who rush in & put out the flames. Video by @BGOnTheScene. #PortlandRiots pic.twitter.com/9gNFo73Lyc

It’s like a war zone in the residential area of SE Portland where antifa are rioting tonight. #PortlandRiots pic.twitter.com/UkgoL4pRPB

Police sprint in and make arrests of antifa rioters on the street in SE Portland. #PortlandRiots pic.twitter.com/rEj8TbD1RW

Extremely heavy smoke in SE Portland tonight as #antifa riot using Molotov cocktails. One person was already set on fire. BLM-antifa are celebrating more than 100 days of violence in the city. #PortlandRiots pic.twitter.com/hqA5lF9gao

Earliest I’ve ever seen it declared a riot. Teargas and fireworks already in full force, and this was just shortly after 9 pm in Portland #PortlandRiots #Portland pic.twitter.com/1CzI5mrorj

Last week, a Trump supporter named Aaron “Jay” Danielson was hunted down and shot dead by Michael Reinoehl, a militant who provided security for Black Lives Matter events in Portland. Reinoehl described himself as “100% Antifa,” The Post Millennial reported.

Portland Mayor Ted Wheeler has done little to control the riots, rejecting federal help, and allowing his own building to be set on fire by Antifa militants. The mayor is reportedly moving house as a result. The Portland City Council also voted to defund the police by $15 million.

Meanwhile, Wheeler’s opposition candidate, Sarah Iannarone, has stated that she is pro-Antifa because “it’s good to oppose fascism.” Continued Below

Portland Mayoral Candidate @sarahforpdx says she is "ANTIFA"- What does she mean? She tells @jessewatters and you're gonna wanna see this! WATCH pic.twitter.com/2XJPScQld0

Here is one of Portland city council members releasing a statement justifying BLM-antifa political violence in the city. At the same time, she has also blamed the attacks on police & undercover white supremacists. She demanded Ted Wheeler give her control of Portland Police. https://t.co/w44q8604rs