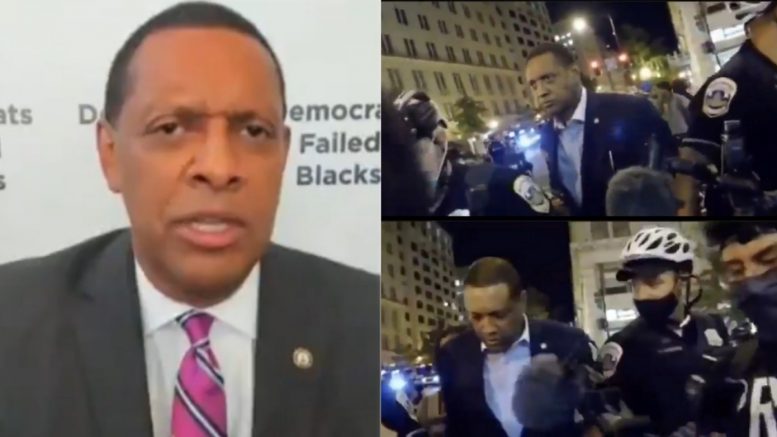 Jones was leaving the White House where President Trump delivered his acceptance speech, only to be surrounded by a large group of protesters who repeatedly began yelling at him.

Police had to form at body wall around Jones to safely escort them through the sea of protesters, some of whom called him a “disgrace” and the ugly racial slur “house n—–,” according to Fox News.

This is another example of the tolerance & peaceful behavior of radical Liberals condoned by @JoeBiden.

Following the scenario, Jones demanded a congressional investigation into who is funding “these professional domestic terrorists,” and he called on Democrat leaders, including Joe Biden and Nancy Pelosi, to “denounce” such actions.

He then slammed demonstrators, many of which appeared to be Black Lives Matter activists, for attacking him when he is a “black life.”

“When you see black lives being attacked by Black Lives members, there’s a hypocrisy there. It’s no secret,” Jones told Fox News.

“I am walking from an event, and here I was being attacked from a mob. This was a mob,” Jo declared. “And most of them weren’t black.”

“I’m a black life. They were willing to fight me or attack me– I’m black. Black lives matter has not come out and said, ‘Look, stop attacking people for their First Amendment right,” Jones said. Video Below

"Here I was attacked by a mob…and most of them weren't Black. I'm a Black life. They were willing to fight me or attack me…" pic.twitter.com/DZ5NozFqWa