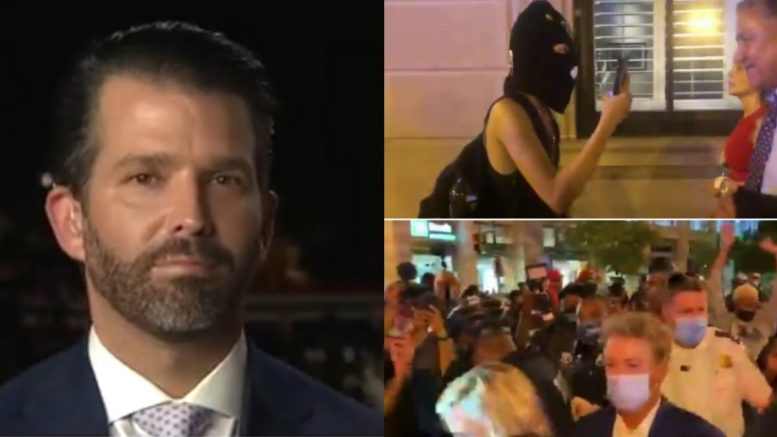 Donald Trump Jr. reacted to protesters who were trying to disrupt the fourth and final night of the Republican convention.

Angry protesters swarmed around the White House, where President Trump delivered his acceptance speech, followed by a fireworks show.

During Trump’s speech, the demonstrators tried to drown out the president’s voice while chanting and even using blow horns. Their attempt, however, failed as Trump got through his speech without any disruptions heard on video.

The angry mob reportedly threatened to burn down Saint John’s church if they didn’t get get what they wanted, according to Laura Ingraham. They also harrassed attendees who were leaving the event, including Senator Rand Paul who was assaulted along with his wife.

A violent BLM mob tries to assault @RandPaul & his wife @KelleyAshbyPaul as they leave the RNC White House event. pic.twitter.com/dgLcQaoc69

Protesters were also caught on camera harrassing other attendees as they were leaving. Take a look:

Asked by Laura Ingraham what he thought about the protesters, Don Jr. said, “I think it’s disgusting. Trying to burn down churches, burn down government buildings, rip down monuments to Lincoln and our Founders — it’s just mind-boggling.”

“It shows the American people what we are truly up against when you have a mainstream media that, for weeks, were pretending that this was peaceful protesting, ” Don Jr. said as he referenced how a CNN reporter stood in front of a burning building in Kenosha, and claimed the protests there were ‘ mostly peaceful.’

“This isn’t Donald Trump. This is Democrat policies, where Democrat people have allowed this to happen,” he declared. “They’ve sat by, they haven’t condemned it. They have sat by and watched it happen in their streets, as if there’s tested acceptance.”

“The Democratic Party is far more likely to stand with a criminal than they are with law abiding citizens, who just want to live the American dream,” Trump Jr. concluded. Video Below

Sessions Tries Convincing Trump He Can Be ‘Trusted’, Trump Fires Back: “You Should Drop Out Of The Race”