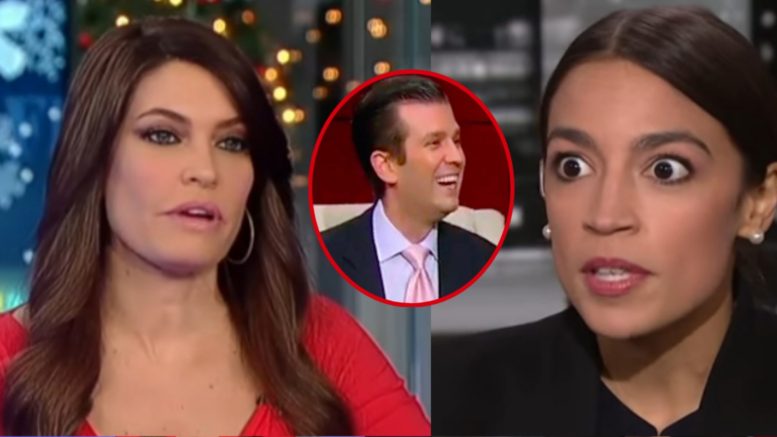 On Thursday this week, Donald Trump Jr. drew laughs from his on Instagram after posting a meme directed at Socialist Democrat Alexandria Ocasio-Cortez.

Ocasio-Cortez, however, did not find Don Jr.’s humor funny. Not only did she call him for posting the meme, but she even went as far as threatening him with a subpoena. See Below

The meme that upset posted by Don Jr. depicted Ocasio-Cortez asking President Trump, “Why are you so afraid of a socialist economy?,” to which President Trump is captioned as replying, “Because Americans want to walk their dogs, not eat them.” 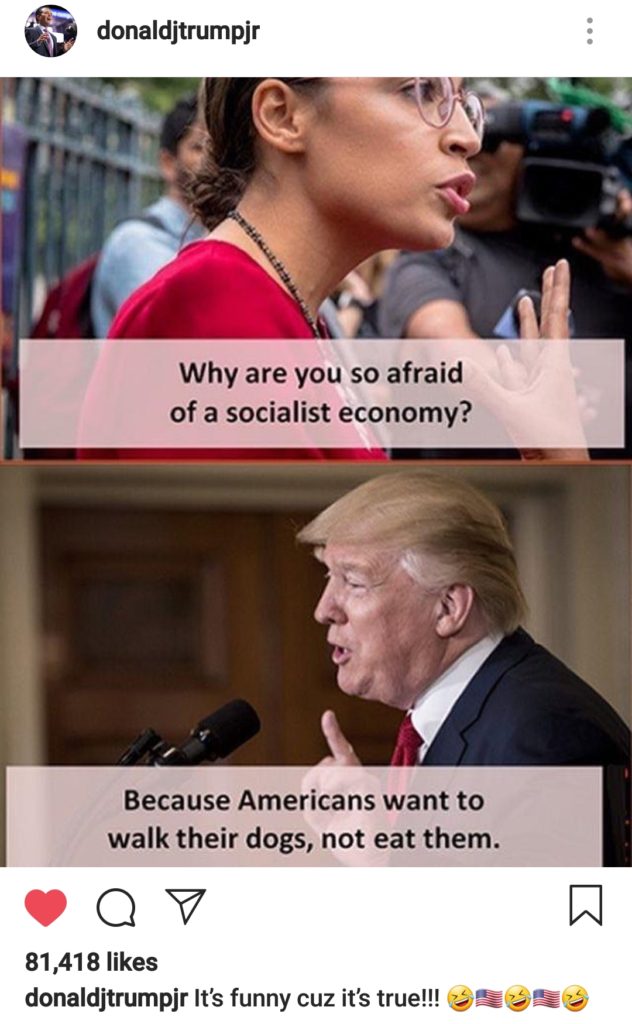 Ocasio-Cortez then responded to Don Jr.’s meme on Twitter, where she said, “I have noticed that Junior here has a habit of posting nonsense about me whenever the Mueller investigation heats up.”

She added, “Please, keep it coming Jr – it’s definitely a “very, very large brain” idea to troll a member of a body that will have subpoena power in a month. Have fun!” See Below

I have noticed that Junior here has a habit of posting nonsense about me whenever the Mueller investigation heats up.

Please, keep it coming Jr – it’s definitely a “very, very large brain” idea to troll a member of a body that will have subpoena power in a month.

Ocasio-Cortez’s was instantly blasted on Twitter for threatening a subpoena on Don Jr. all over a simple meme.

Among  reactions by Twitter users, Don Jr.’s girlfriend Kimberly Guilfoyle slammed Ocasio-Cortez when she responded, “Did you just threaten to subpoena someone for criticizing you? As a lawyer and former prosecutor I find this deeply troubling.”

Did you just threaten to subpoena someone for criticizing you? As a lawyer and former prosecutor I find this deeply troubling. https://t.co/OqIpBkbsIS

Co-Founder of The Federalist, Sean Davis  called for an ethics investigation into Ocasio-Cortez and cited that lawmakers are “prohibited from threatening punitive action” against people/groups for not politically supporting the lawmaker.

And the rest of the Twitterverse chimed in on what they thought about the remarks made by the Socialist Democrat. See Below

Here are some more strong reactions:

So you’re going to subpoena him for a meme? Seems a bit excessive

It has nothing to do with Mueller investigation. It has to do with you making silly remarks or comments. You have been know to make unusual comments that don’t make sense.

The body in question (House of Representatives) already has subpoena power (apparently unbeknownst to AOC) . . . & this tweet appears to be a threat by her to use her official position . . . which she doesn't even occupy yet . . . to pursue a personal grudge. Is that even legal?

Threatening an American’s freedom of speech, with subpoena power? How Socialist of you.

Holy shit. If anyone in the Trump administration were to threaten using the law enforcement power of the executive branch over using a meme, the left would be calling treason and discussing impeachment – as they should over that banana republic fascism.

In light of the growing negative reactions to her remarks, Ocasio-Cortez tried to save face and put out the fire she caused.

For the GOP crying that this is a “threat” – I don’t have power to subpoena anybody.

Congress as a body, GOP included, has the power. No indiv. member can issue a subpoena unless they are a Chair (which, as a freshman, I can assure you I will not be). Also must be under purview.