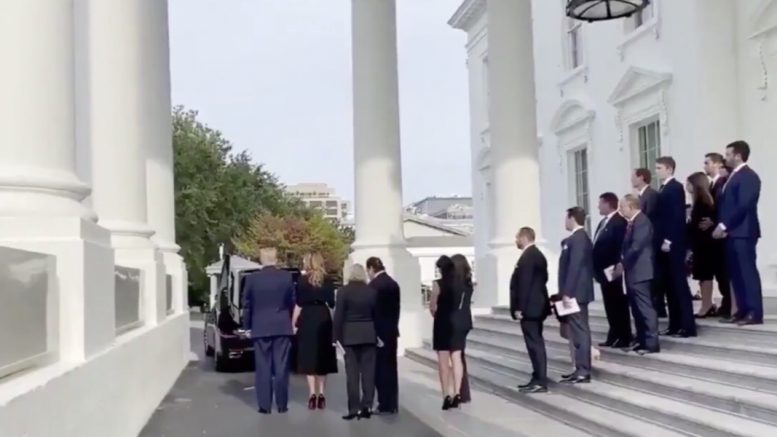 The Commander in Chief and his family celebrated the life of his brother, Robert Trump, during a private service at the White House on Friday afternoon.

President Donald Trump and his wife First Lady Melania Trump were seen walking down the North Portico steps following Mr. Robert Trump’s casket, watching him being placed in a hearse.

A somber moment as Pres & Mrs Trump watch the hearse bearing the casket of the president's late brother Robert, slowly pull away from the North Portico after a funeral service this afternoon. pic.twitter.com/PpkuIrGxk6

With bagpipes playing, the president and first lady Melania Trump followed his brother’s casket to a waiting hearse in the late afternoon. They stood at attention and held hands for a couple of moments as the casket was placed inside. A few dozen family and friends stood nearby on the White House steps. As the hearse drove away, the president and first lady returned to the residence and some in the group embraced, Fox News reported.

Robert Trump passed away Saturday after being hospitalized in New York. The president had visited his brother in the hospital the night before his death.

“It is with heavy heart I share that my wonderful brother, Robert, peacefully passed away tonight,” the Commander in Chief wrote in an official White House statement. “He was not just my brother, he was my best friend. He will be greatly missed, but we will meet again. His memory will live on in my heart forever.” Continued Below

“This was not a great weekend. It’s very hard. You knew it was going to happen, but still, when it happens it’s a very tough thing,” the president said on “Fox and Friends” Monday. “He was a great guy. He was a tremendous guy. He was my friend. I guess they say best friend, and that’s true. And losing him, not easy.”

Later, he told reporters prior to departing for Wisconsin, that he may hold a funeral service for his brother at the White House on Friday.

NEW: Pres. Trump says he hopes to have a small service for his brother at the White House Friday.

"That would be, I think, a great honor to him…He loved our country so much. He was so proud of what we were doing and what we are doing for our country." https://t.co/PkzcMENAkZ pic.twitter.com/UXsYZ5XTfi

The event marked one of the rare instances during which a deceased person is brought to the White House. The last instance was in 1963, after President John F. Kennedy was assassinated in Dallas, according to ABC News.

A private citizen has not been brought to the White House for a funeral since 1936, when a service was held for Louis Howe, an adviser to President Franklin Delano Roosevelt, New York Post reported.