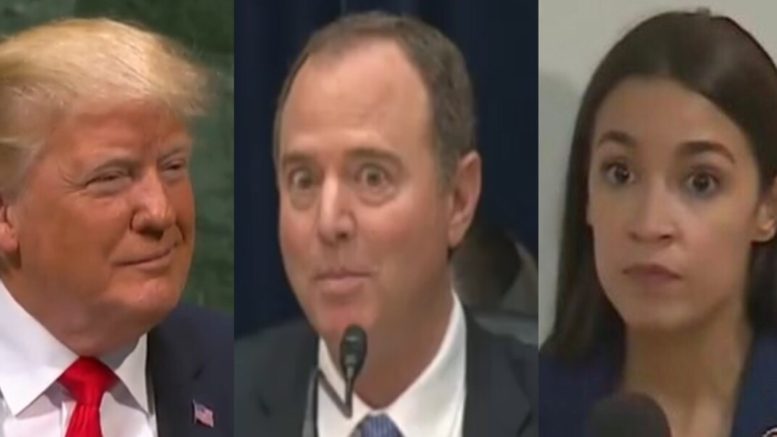 Rep. Alexandria Ocasio-Cortez (D-NY) recently told constituents at a town hall that she was tired of her party’s current efforts to impeach President Trump. “I think the whole thing is boring,” she said Thursday at a Queens Library event. “He should have been impeached a long time ago. I’m over it. And so that’s how I feel about it because we’ve got work to do.”

Cortez, however, appears to have resorted back to accusing the President of “antisemitism” and “bigotry”, while defending House Intelligence Committee Chairman, Adam Schiff (D-CA), who is Jewish. She accused the President of being engaged in “targeted anti-semitism” on Schiff.

Ocasio-Cortez took to Twitter on Saturday where she posted an article from The Intercept, entitled, “Fighting Calls for Impeachment, Trump Intensifies Anti-Semitic Rhetoric. We Cannot Ignore It“.

In the article written by Mehdi Hasan, he suggests that “President Donald Trump and his acolytes ‘borrowed a page from the neo-Nazi website the Daily Stormer playbook’.” Further, he asserted, “The president’s outrageous insistence that foreign governments dish up dirt on Joe Biden and his son, they happen to be banging their anti-Semitic drum in plain sight.”

Hasan proceeded to included a tweet from the President in September, to which he then claimed that Trump’s rhetoric was “racist”. The tweet he referenced, in particular; Trump asked, “Can you imagine if these Do Nothing Democrat Savages, people like Nadler, Schiff, AOC Plus 3, and many more, had a Republican Party who would have done to Obama what the Do Nothings are doing to me. Oh well, maybe next time!”

He then suggested that when the President called Schiff “Shifty Schiff” that it was an anti-Semitic attack towards the California Congressman as he wrote, “The stereotype of Jews as ‘shifty,’ [suggests] that they are sneaky and manipulative.” (Continued Below)

Don Jr. ripped Schiff in a long thread on Twitter for his false interpretation of the White House transcript phone call between President Trump and Ukrainian President Zelensky during a congressional hearing. Hasan, however, accused the President’s son of anti-Semitism because in Trump Jr’s rant of Schiff, he used the terms “radical liberal, handpicked by George Soros, and a Soros puppet.”

Ocasio-Cortez jumped on the wagon after she seemingly read the article, to claim that the President is “engaged in targeted antisemitism” towards Schiff. (Continued Below)

“Understand that Trump is engaged in deliberate, atrocious, targeted antisemitism towards Chairman Schiff. Then ask yourself why no one cares to denounce it – esp when his accusation of it towards others drove full news cycles earlier this year,” Cortez wrote on Twitter including the article written by Mehdi Hasan.

She added, “It’s wrong. It’s harmful. And his bigotry is reflective of the white supremacist base he relies on for political gain.”

(Related: AOC Suggests President Trump’s Support Is Built On A ‘Coalition’ Of Racists)

It is worth noting, President Trump has repeatedly denounced all forms of hatred and racism, including white supremacists to the fullest, which debunks and destroys what his critics say. You can read more about that in an article reported by Us4Trump entitled: “Sixteen Times Trump Denounced Racism Gets Put On Full Blast Destroying His Critics“.  (Continued Below)

It’s wrong. It’s harmful. And his bigotry is reflective of the white supremacist base he relies on for political gain.

Charlie Kirk, founder and Executive Director of Turning Point USA, pointed out that Ocasio-Cortez’s attacks at President Trump are “disgusting and baseless” and included the following:

Trump’s son in law is Jewish

Trump moved the embassy to Jerusalem

Your attacks on our President are disgusting and baseless https://t.co/FRPPPZ8AYn