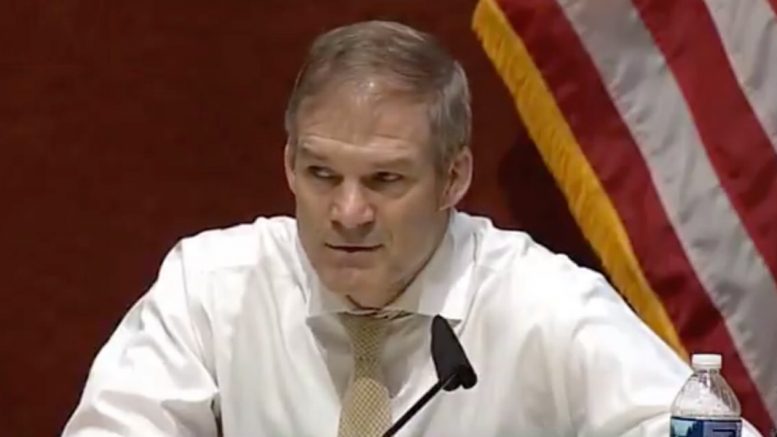 During a Wednesday House Judiciary Committee hearing over “Policing Practices and Law Enforcement Accountability”, Ranking Member Rep. Jim Jordan (R-OH) condemned his Democratic colleagues, accusing them of not speaking out against the “defund the police” movement, and chastising it as a “crazy policy.”

The hearing comes after riots and protests escalated throughout the country in response to the death of George Floyd while in police custody last month. It also comes amid calls from liberals to abolish, reform, and defund the police.

In his opening statement, Rep. Jim Jordan said that the American people “understand it is time for a real discussion, real debate, and real solutions about police treatment of African Americans.”

“Americans also understand that peaceful protest, exercising their First Amendment liberties, honors George Floyd’s memory, and it helps that discussion, that debate, and solutions actually happen,” the ranking member said, while pointing out that “there is a big difference between peaceful protest and rioting … and looting, … violence and attacking innocent people.”

“And there is certainly a big difference between peaceful protest and killing police officers,” Jordan said. “You know what else the American people fully understand? They know as the chairman said that the vast, vast majority… of law enforcement officers are responsible, hardworking, heroic first responders.”

Jordan said that officers “protect the Capitol every single day”, adding, “There are the officers who rushed into the Twin Towers on 9-11, they’re the officers in in every one of our neighborhoods, every day, every night, every shift they work, they put their lives on the line to keep our communities safe.” Continued Below

“And guess what Americans also get? Guess what else they understand? They know it is pure insanity to defund the police,” Jordan said. “And the fact that my Democratic colleagues won’t speak out against this crazy policy is just that — frightening.”

Jordan went on to reference Los Angeles Mayor Eric Garcetti and New York City Mayor Bill de Blasio, both of whom have said they support slashing police budgets and reinvesting in communities. “The city council in Minneapolis, a veto-proof majority says that they want to defund the police and abolish the department,” he noted.

Then he slammed his Democratic colleagues, by mentioning that the legislative session began with “folks on the left pushing to abolish ICE, then abolish the Department of Homeland Security, and now they’re talking about abolishing the police.” Continued Below

Jordan went on to quote President Trump’s remarks last month, where he said “our mission” was “healing not hatred, justice not chaos.”

President Trump said on May 30 at the Kennedy Space Center: “I stand before you as a friend and an ally to every American seeking justice  and peace. And I stand before you in firm opposition to anyone exploiting tragedy to loot, rob, attack, and menace. Healing not hatred, justice not chaos are the mission at hand.”

“Well said, Mr. President. Healing not hatred, justice not chaos. That is our mission,” Jordan reiterated. “The president is right and I appreciate his leadership. This is the House Judiciary Committee. With it’s historic history of defending the Constitution and the rule of law, let’s adopt that mission: healing not hatred, justice not chaos. Let’s work together to continue to make America the greatest nation ever.” Video Below

Further, Rep. Jim Jordan wrote a letter to Attorney General William Barr requesting a briefing from over the Justice Department’s actions in response to the death of George Floyd in Minneapolis police custody, covering everything from the federal civil rights investigation to the push to designate Antifa as a domestic terrorist organization.

He also asked Barr to “explain how designating Antifa as a terrorist organization would affect the Justice Department’s authority to identify, prevent and prosecute rioting, looting and violence perpetrated by left-wing violent extremists.”