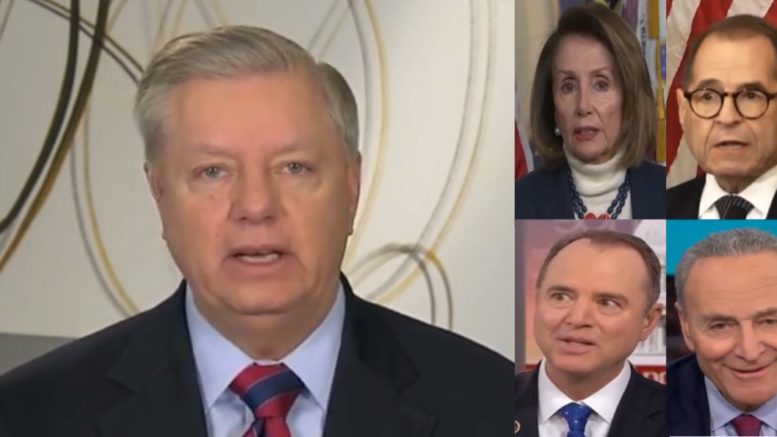 Senate Judiciary Chairman Lindsey Graham (R-SC) spoke with host Maria Bartiromo on Fox News‘ “Sunday Morning Futures” where he reacted to House Speaker Nancy Pelosi (D-CA) not sending the articles of impeachment to the Senate yet.

Pelosi told reporters during a press conference that she won’t choose impeachment managers or send them to Senate until the Senate agrees on trial rules: “When we impeached the President, immediately everyone was on for the next thing. The next thing for us will be when we see the process that’s set forth in the Senate. Then, we’ll know the number of managers that we may have to go forward and who we would choose. …When we see what they have, we’ll know who and how many to send over,” she stated.

“[Pelosi] is taking a wrecking ball to the Constitution,” Senator Lindsey Graham said. “This is the latest in a series of constitutional train wrecks orchestrated by Nancy Pelosi. During the impeachment process, the president was not allowed to have counsel present during the Intel Committee, he could not call witnesses on his behalf, he could not confront his accuser and now that he’s been charged with two articles of impeachment, Nancy Pelosi is denying the president his day in the court in the Senate and she is actually trying to tell [Senate Majority Leader] Mitch McConnell how to run the Senate.”

“She’s trampling on the separation of powers,” Graham continued. “It’s the Senate’s job to dispose of impeachment articles once passed by the House, it’s not Nancy Pelosi’s job. When it comes to Trump, the rules don’t matter to Democrats and that’s dangerous and sad.”

Graham believes what Pelosi is doing is equivalent to extortion and clarified: “What [Pelosi] is trying to do is to get Mitch McConnel to bend to her will to shape the trial. Can you imagine if the roles were reversed? You had a Democratic president impeached by a Republican House and the Republican Speaker was telling the Democratic majority leader how to run the trial?”

“Democrats hate him so much they don’t love anything constitutional anymore,” Graham told Bartiromo. “All the rules have been thrown in a ditch to get Trump. From the way they impeached him to now, denying his day in court.” (Continued Below)

“Here’s how it’s going to end: [Pelosi will] eventually send the articles because public opinion will crush the Democrats,” he stated. “You got the minority leader, Chuck Schumer, conspiring with the Speaker of the House, basically to insist upon calling witnesses.”

Graham explained that President Trump invoked executive privilege pertaining to top officials in the White House from testifying as part of the House impeachment inquiry. “They impeached this president because he chose to go to the courts. The second article of impeachment is obstruction of Congress. The president has claimed executive privilege. Instead of allowing the president to exercise his legal rights, they’ve impeached him because he wanted to go to court,” Graham said.

“Can you imagine what would have happened if we had done to this a Democrat– that we impeach a Democrat because they wanted to go to court?” he wondered. (Continued Below)

Asked if he expects there will be witnesses in the Senate trial, Graham answered, “The court’s available to every American, including Donald Trump. So if you call these witnesses, who worked for the president after he’s invoked executive privilege– if you deny him his day in court, then you’re abusing the constitutional rights of Donald Trump as president, and you’re putting the entire presidency at risk.”

“I can’t imagine any Senator doing this to the presidency. What did they impeach him for? They impeached him because he wanted to go to court. Instead of allowing the president to go to court to exercise executive privilege, they put an artificial time limit and said and said, ‘If you don’t allow these witnesses to come to the House … we’re gonna impeach you.’ They impeached him for exercising his legal rights,” he explained.

“I hope the senators will not vote to compel witnesses before the court determines whether or not there is executive privilege,” Graham expressed. (Video Below)

“And to this impeachment debacle, to my Democratic colleagues, impeachment is a dead cat. Stop playing with it. Bury it. It’s going nowhere. Quit violating the Constitution. Give the president his day in court and let’s get this behind us so we can talk about things people really care about in this country,” Senator Graham added. [Emphasis added].

‘Bomb The Hell Out Of It’: Trump Urges, If Military ‘Equipment’ In Afghanistan Is ‘Not Handed Back’ To U.S.