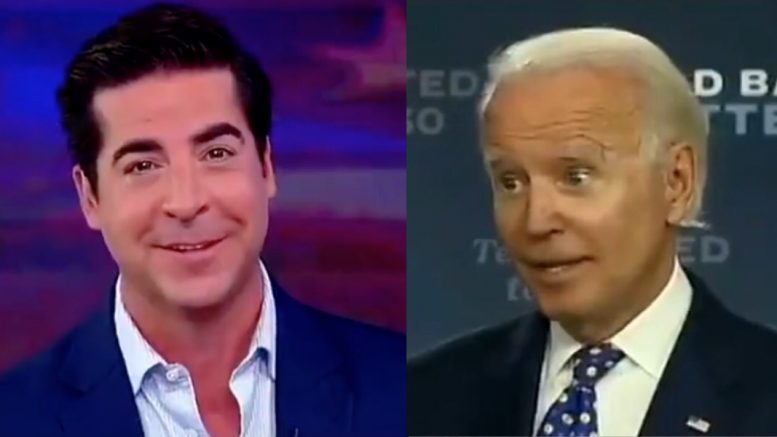 On Saturday evening during “Watters’ World”, Fox News host Jesse Watters said that Democratic presidential nominee Joe Biden “doesn’t really have a base”, suggesting that it is “all borrowed Bernie Bros and Trump haters”.

Watters began by showing a chart that showed a shift across the board for President Donald Trump in battle ground states in his favor. “Forget about the national polls, it’s all about the battle ground states anyway. Most pollsters are under sampling Republicans, the size, 10 points. They do that just to depress turnout. Don’t fall for it,” the Fox News host said.

He went on to point out that in last 40 years, “only two insurgent candidates have knocked off an incumbent” in a presidential election. “Rockstar Ronald Regan and the politically gifted Bill Clinton,” he said.

“Biden, he doesn’t have anywhere near that kind of talent and that’s why he’s hiding,” Watters said.

He explained what the president is doing to tackle the coronavirus crisis: “The president has been a lot more focused on the last two weeks. He’s brought back the coronavirus briefings, addressing the nation 6 times from the briefing room. His tone is more serious, realistic and steady. He’s made major announcements about restocking the national PPE stockpiles, depleted under Obama and Biden. The vaccine trial phase is smashing all records. The therapeutics have been effective in the early stages. And hospitals and mortality rates slashed in half.” Continued Below

“And the president also announced the U.S. will soon become pharmaceutically independent, meaning we’ll be producing enough medical ingredients to keep our supply chain here in America. He’s punishing China for unleashing the virus on the world, while Joe Biden says nothing about the Communist threat,” Watters continued.

He noted that President Trump “has beefed up his travel schedule too”, as he recently visited Florida, North Carolina, Georgia, and Maryland. “Leaving the White House to visit oil rigs, military facilities, and medical plants,” he said.

Watters switched his focus on Biden and the surging crime across the nation. “Biden doesn’t have a clue how to keep the streets safe. He could barely muster up a response to the anarchy in the first place.” Continued Below

“This is a base election, all about turnout,” Watters said. “Trump’s base is twice as fired up as Joe’s base is. In fact, Joe doesn’t really have a base. Have you ever seen a Biden bumper sticker anywhere? They don’t exist. Biden’s base is basically borrowed Bernie bros and Trump haters. There’s not love for Joe Biden. In fact, the squad may not even vote for Joe.”

“… Biden is desperate to rally the rally the radical left and let slip this week that he himself is radical left,” he noted, before playing a clip of Biden saying: “I think I’ve laid out the most detailed plans on the economy and on issues related to healthcare and the rest of any president in modern history. … If I’m elected and this passes, I’m gonna be going down as one of the most progressive presidents in American history”. Video Below

Watters concluded by saying that President Trump doesn’t have to “stretch too far to paint Biden as left, because Biden just admitted it”, adding that “Biden doesn’t know who he is. He’ll just read whatever you put in front of him. He doesn’t even know what year it is.”

“… Biden’s always been a joke. He’s run for president three times. He’s a plagiarist, he’s a hair sniffer. He’s a national punchline, always has been. … This is going to be a very close election, but President Trump still has the edge,” he added.

.@JesseBWatters says @JoeBiden Doesn’t even have a base. It’s all borrowed Bernie Bros and Trump haters. pic.twitter.com/beZQGP0Cyr

(Related: Donald Trump Jr. On Biden’s Latest Blunder: “When Does This Start Being Considered Elder Abuse?”)