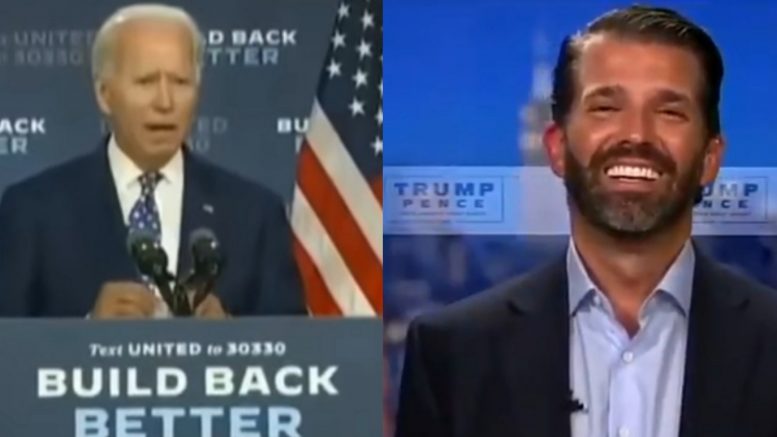 Donald Trump Jr. weighed in on another Joe Biden blunder that happened at the beginning of his speech last week.

While walking up to the podium, the former Vice President appeared to forget what building he was in.

Biden said, “Good afternoon everyone. Welcome to Kingswood Community Center. Actually, that’s the one down where I used to work. It was a joke. I didn’t know where we were, anyway…”

Joe Biden forgot where he was again. The Democrats are literally running an old man who doesn’t know where he is half the time. Insanity. pic.twitter.com/5EI3g2zFUO

“Honestly, it would be truly sad if it wasn’t so scary that this guy could be in charge of the nuclear football,” he added.

“You see it every day. He doesn’t know where he is, he forgets where his wife is, he forgets what office he’s running for,” Trump Jr. said. “And don’t forget, Joe Biden is a 50-year seamp creature. If you’ve been a politician for 50 years, you should be able to get in front of a whopping crowd of 7 people and be able to do it without a teleprompter.” Video Below

.@DonaldJTrumpJr says @JoeBiden is literally the first politician in history to not go over the time limit in a debate. At what point do we start calling it elder abuse. pic.twitter.com/J4pOejSRep

Lewandowski Paints A Depiction Of Who The ‘Whistleblower’ Is: ‘This Is Like Spaceballs The Movie’

Grant Stinchfield To Donald Trump Jr.: “Any Chance You Run For Office Soon?”