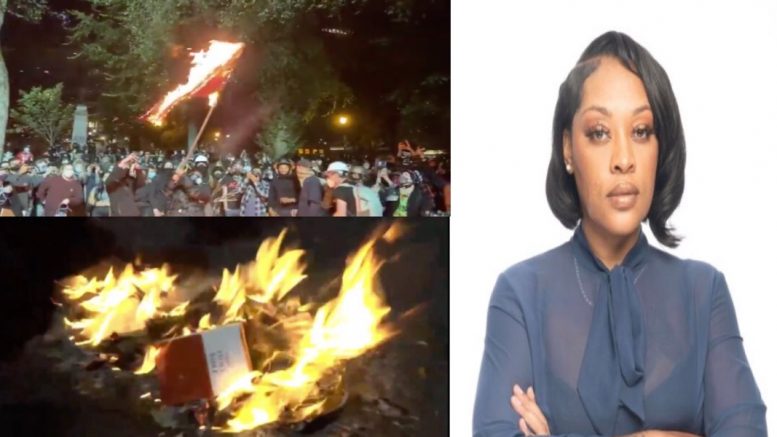 The Portland Police reported that during the evening of July 31, 2020 hundreds of people came together in a mass gathering, giving speeches, blocking traffic, and also congregating outside the U.S. Federal Courthouse.

Some lit fires, climbed the fence outside the federal courthouse, threw objects and chanted. Protesters also started a bonfire in front of the federal courthouse. People brought plywood and other flammable material to keep it going. Some protesters were also seen in video burning American flags and Bibles, which were engulfed in flames.

I don’t know what burning the Bible has to do with protesting against police brutality.

Do not be under the illusion that these protests and riots are anything but an attempt to dismantle all of Western Civilization and upend centuries of tradition and freedom of religion.

Other videos show American flags being engulfed in flames:

'F*ck Trump!' | Bible and US flag set alight on 65th night of protests in #Portland pic.twitter.com/3c60egqEa3

The violent chaos has continued in Portland for well over 60 days. Early Friday morning, Portland protesters dumped a pig’s severed head on an American flag, put a cop hat on it, and set it ablaze, Brietbart reported.

Antifa protesters dumped a bloody severed pig's head on an American flag outside the Justice Center in downtown Portland. They put a cop's hat on it and set all of it on fire. #PortlandRiots #antifa pic.twitter.com/qfAOT4ItxP

“Too far! Why burn Bibles and flags to show disdain for this country then turn around and preach the eulogy from those same bibles and use those same flags to cover the caskets of our American hero’s?” King tweeted.

Others on Twitter also reacted after seeing the video footage of Bibles and the American flag being destroyed:

A lot of “Christians” who were UPSET about President @realDonaldTrump HOLDING UP a Bible in front of a Church in Washington D.C are QUIET about “Protestors” BURNING Bibles in front of a Federal Courthouse in Portland.

One user on Twitter noted “free Bibles a group was giving away earlier”:

Meanwhile, about 30 feet away, someone is burning what I assume is one of the free Bibles a group was giving away earlier pic.twitter.com/wnjM54IiLA

A century before the Third Reich, German poet Heinrich Heine prophesied that where books are burned, humans will soon be burned also. Antifa/BLM has chosen the brazenly atheist path of Joseph Goebbels. Let the reader understand. https://t.co/EADFMKTmRZ

Theses violent communists — who are being aided, abetted, and coddled by most every major leftist politician — not only want to destroy America but Christianity. Insurrection Act! https://t.co/CsufCZHngz

Antifa burned bibles last night. They are what they claim to hate. Fascists.

When you vote, remember that elected Democrats said it was okay to burn bibles but not okay to go to church to read the Bible together. Vote GOP.

This election is Good vs. Evil. https://t.co/26HVhbONpv

What does that have to do with George Floyd or Police Brutality?

This isn't about black lives anymore. It's about destroying everything our civilization stands for.

Why won't Democrats condemn this?

These are the same people who want to control the White House, Congress, the Supreme Court, your state, your cities, your schools, AND your FREEDOM. https://t.co/5Ko0IeLmzd

(Related: Portland Mayor Ted Wheeler Tear-Gassed At Protest, Yelled At By Protesters: “Get The F–K Out Of Here!”)