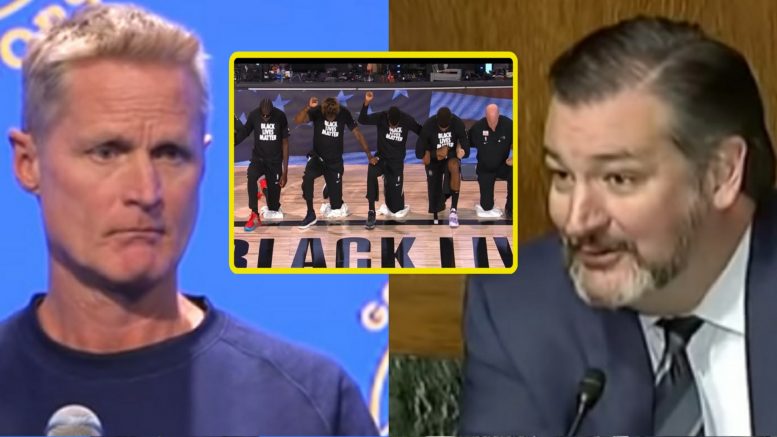 The NBA restarted their season on Thursday as players and coaches took part in controversial demonstrations before tip-off in their effort combat “racial injustice”.

As the first games aired all over the nation, “Black Lives Matter” was seen painted on the courts, and players were spotted wearing BLM shirts over their jerseys. Players and team staff then kneeled as the national anthem played before games started.

While there are mixed feelings on the NBA’s decision to allow the league to be a platform for “Black Lives Matter” demonstrations, Golden State Warriors head coach Steve Kerr attempted to justify the controversial approach.

“With NBA games now in full force, the inevitable race baiting ‘kneeling is a sign of disrespect!’ tweets are coming,” Kerr tweeted.

“Our message is clear: We love our country. And we also believe that this nation can and must do better to eliminate racism and bigotry. That is why we kneel,” he added.

Senator Ted Cruz reacted to Mr. Kerr after coming across his tweet. Continued Below

“Here’s a better idea: stand for the anthem, to honor our Nation & the heroes who died for our freedom,” Cruz said in his reply to Kerr.

“And then support school choice by donating 10% of your salaries for scholarships for low-income children to attend excellent schools,” he added. See Below

While nearly all of the NBA players and team staff have been united in their effort to promote the so-called anti-police brutality movement, Orlando Magic player Jonathon Isaac faced backlash for refusing to kneel for the anthem and wear the “Black Lives Matter” garb.

We leave you with Isaac’s post-game explanation behind his decision: