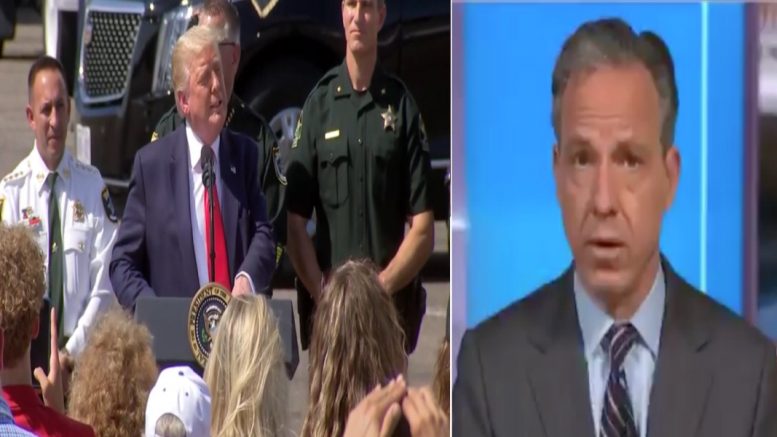 On Friday, the Commander in Chief met with Florida sheriffs and vowed to support the officers amid calls for police reform in the aftermath of George Floyd’s death. “As long as I’m president, I will never defund your police, that I promise you,” President Trump said with a line of sheriffs standing behind him.

As the president was accepting the endorsement from the Florida Police Benevolent Association, CNN’s Jake Tapper criticized President Trump on air, claiming “this tarmac event has turned into something of mini Trump rally”.

Following the CNN’s host’s comments, the Commander in Chief fired back at Tapper, informing him that it was not a Trump rally, but rather a “very successful gathering”.

“Jake, this wasn’t a Trump Rally, but rather a very successful gathering of the great Sheriffs and Law Enforcement (of Florida) who gave me their unequivocal ENDORSEMENT,” the president tweeted on Saturday.

“No Defund the Police here. Best Wishes!” he added. Continued Below

(Related: President Of FL’s Biggest Police Union On Why They Voted Unanimously To Endorse Trump: “Tired Of…Being Used Like A Punching Bag”)

In another tweet on Saturday, President Trump responded after Dr. Anthony Fauci said on Friday that most European countries shut their economy by 95%, while functionally the U.S. only shut its economy down by 50%. He gave his explanation over why the U.S. has continued to see a surge in cases.

The president replied on Twitter Saturday, declaring: “Wrong! We have more cases because we have tested far more than any other country, 60,000,000. If we tested less, there would be less cases. How did Italy, France & Spain do? Now Europe sadly has flare ups. Most of our governors worked hard & smart. We will come back STRONG!”

Estimates of the virus’s reproduction rate suggest that it’s risen back to around or above 1 in the following countries:

That means one infected person will on average spread it to more than one other person https://t.co/KFKMPN2OAy pic.twitter.com/ptb9B1D7mK

The president, also on Friday, stressed that cases are high because “we do MUCH MORE testing than any other country in the World”.

(Related: Dr. Fauci: “To My Knowledge, None Of Us Have Ever Been Told To Slow Down On Testing. That Just Is A Fact”)

Trump Releases A Statement Ahead Of Tonight’s OH Rally: “The Greatest Witch Hunt In US History Continues!”