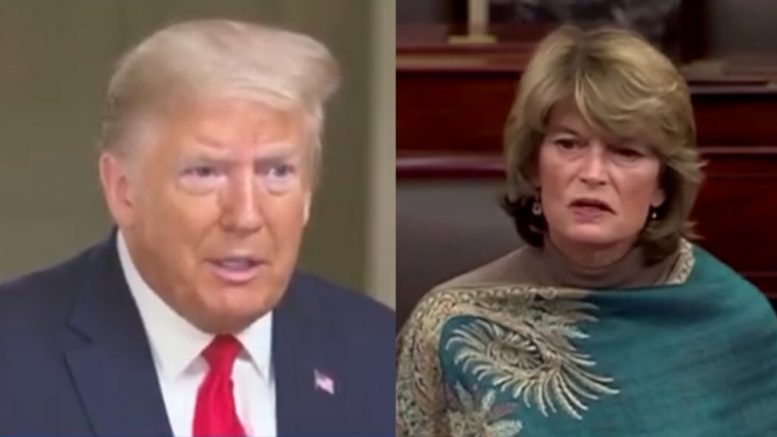 The Commander in Chief fired back Thursday against Lisa Murkowski, announcing he would  endorse “any candidate” with a “pulse” who runs against the Republican Alaskan Senator when she is up for reelection in 2022.

Murkowski said on Thursday that she supported former defense secretary James Mattis’ condemnation of President Trump over his response to protests in the wake of George Floyd’s killing. She described Mattis’ statement as “true, honest, necessary and overdue,” Politico’s Andrew Desiderio reported.

“When I saw General Mattis’ comments yesterday, I felt like perhaps we’re getting to the point where we can be more honest with the concerns we might hold internally, and have the courage of our convictions to speak up,” Senator Murkowski said.

In a pair of tweets Thursday, President Trump responded to the Alaska Senator’s comments, vowing to campaign against her two years from now.

“Few people know where they’ll be in two years from now, but I do, in the Great State of Alaska (which I love) campaigning against Senator Lisa Murkowski,” the president announced. Continued Below

“She voted against Health Care, Justice Kavanaugh, and much else,” President Trump noted.

“Unrelated, I gave Alaska ANWR, major highways, and more. Get any candidate ready, good or bad, I don’t care, I’m endorsing. If you have a pulse, I’m with you!” he declared.

Alaska resoundingly voted for President Trump in the 2016 election to defeat twice failed Democratic presidential candidate, Hillary Clinton. Donald Trump picked up all of the Alaskan electoral votes and won by 51.3% to Hillary’s 36.6% of the votes. Continued Below

Murkowski broke with the Republican Party in October 2018, when she voted against moving ahead with Judge Brett M. Kavanaugh’s confirmation to the Supreme Court.

Sarah Palin took to Twitter after Murkowski voted against Kavanaugh in the cloture vote and wrote: “Hey @LisaMurkowski- I can see 2022 from my house…”

Former Secretary of Defense General Jim Mattis, in an article published by The Atlantic, blasted the military for providing a “bizarre photo op” at St. John’s church and accused Trump of not ever trying to “unite the American people.”

(Related: Mattis Claims Trump ‘Does Not Try To Unite The American People’, Trump Fires Back: “Glad He Is Gone!”)