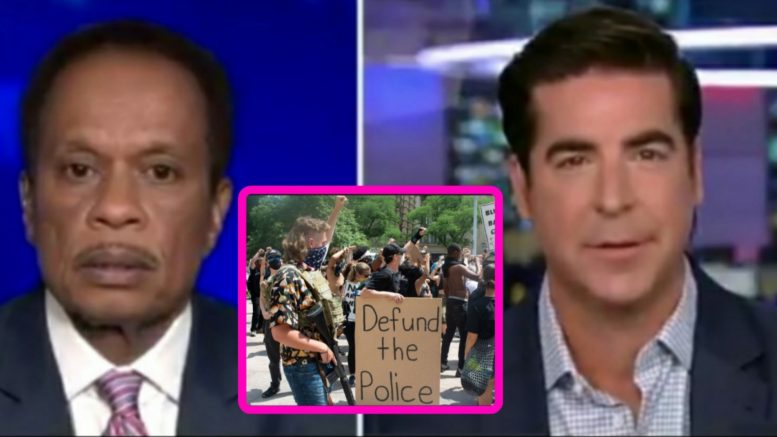 On Friday, Jesse Watters broke down several negative “tangible results” of the anti-police movement that has swept across America after George Floyd’s death back in May.

Watters questioned whether the movement “has been a bust” since it appears to have done more harm than good, in his opinion, given that there hasn’t been any major accomplishments.

Related Article: Jesse Watters: “One Of The Main Reasons Trump Was Elected In The First Place Was Because Of Obama”

“What are the tangible results of the movement?” Jesse asked. “Let’s judge the results here specifically.”

“Homicides are up everywhere, hundreds of people have been injured — police officers included — millions of dollars in property damage, people are fleeing cities, they’re buying weapons, COVID-19 has spread, cancel culture got out of control, there have been at least twenty people killed in the riots as a result of this,” he added.

“So, what were the accomplishments? Because Democrats blocked police reform,” Watters said. “What, a statue was toppled, the Redskins changed their name, someone resigned from the New York Times — really?”

“Is that what the BLM movement gave birth to? Is that really it?” he continued. “Because at this point, you really have to ask yourself, ‘Is this movement objectively — has it been a bust?'”

“I’m talking about action, and the action has been tragic. There has been a move towards anarchy and fear and violence — not towards unity and peace as a result of this,” Jesse declared. Video Below

"What were the accomplishments? Because Democrats blocked police reform. A statue is toppled, the Redskins changed their name, someone resigned from The New York Times-Is that what the BLM movement gave birth to #TheFive pic.twitter.com/gZN9e4Pvq1

Gutfeld Tears Apart Dems Over Their ‘Impeachment Show’: ‘They Were Shouting Impeachment Even Before They Could Walk’