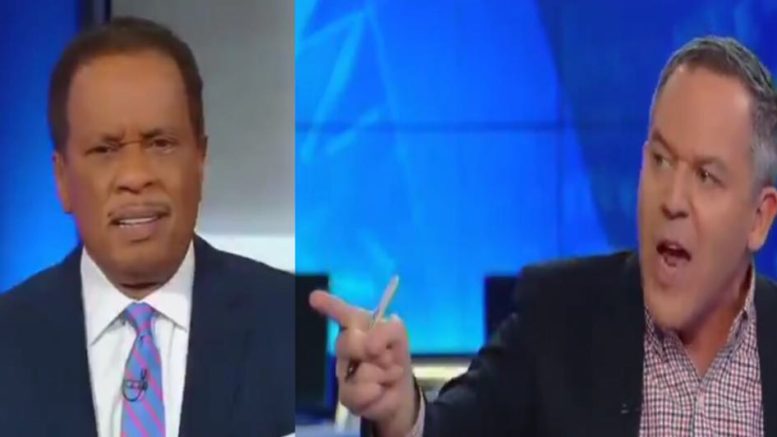 Things got a little heated on Fox News‘ “The Five” Wednesday, after Michael Cohen testified on Capitol Hill before the House Oversight Committee.

Greg Gutfeld and Juan Williams clashed during the segment, not once, but twice. (Videos Below)

Wednesday during “The Five,” Juan Williams spouted off talking points and apparently kept talking or interrupting while not giving co-host Morgan Ortagus an opportunity to speak.

Gutfeld called out Juan and asked, “What about Morgan? Morgan has not spoken!”

Juan replied, “Gosh! Are you guys ever gonna let me finish?”

Gutfeld fired back, “No, because you’re always finishing! There’s somebody sitting there who hasn’t said a damn word!” (Videos Below)

Juan shot back, “You are so deep in the bunker….”

Gutfeld didn’t hold back and responded, “Oh shut up Juan! I’m in nobodies bunker,” as he tried to explain that he wanted to give Morgan a chance to speak.

However, it didn’t stop there.

Jesse Watters was recapping a part from Cohen’s testimony where he claimed that Roger Stone knew in advance of the Hillary Clinton email drop and told President Trump. However, this was debunked as WikiLeaks came forward with evidence that Cohen was lying.

Juan didn’t agree with with Watters’ statement apparently, and he tried to use Democrat talking points. Further he added, “That’s pretty ridiculous. But again, you are so blind… cuz like Greg, you are deep in the bunker.”

Juan struck a nerve with Gutfeld and he went off.

“You know, if you say that again, I’m gonna throw you off the set!” He declared, “Because you know what the bunker means… what you’re intimating? Who’s in the bunker? Adolf Hitler! You choose the worst intent of people’s words.”

Juan tried to explain himself, but Gutfeld wasn’t having it.

Watch the two short clips below as Juan Williams and Greg Gutfeld duke it out:

Things getting a bit heated today between @greggutfeld and @TheJuanWilliams on @TheFive – Clip: pic.twitter.com/nyf0sU76FN

There's about to be a fist fight on Fox News pic.twitter.com/PeNmDYIGc8

Beto Tells Immigrants America Was Founded On ‘White Supremacy’, Gutfeld Fires Back: ‘He’s So White, Wonder Bread Could Sue Him For Plagiarism’

Sarah Sanders Announces New Job At Fox News, Mike Huckabee Responds: ‘If You Had Signed W/ CNN, You’d Been Voted Off The Island!’

Watters: ‘This Involves the Entire Biden Family & Most Importantly, the President of the United States’