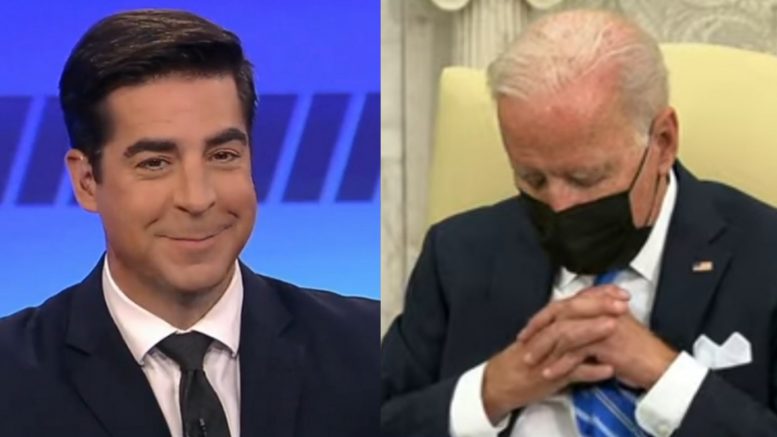 Jesse Watters sarcastically claimed Joe Biden’s policy at the U.S./Mexican border is written by The Babylon Bee, which is a website that publishes satirical news articles on topics including religion, politics, current events, and public figures.

Watters made the suggestion while weighing in on news that “a plan is being circulated by President Joe Biden’s administration to provide border crossers, subjected to former President Trump’s ‘Zero Tolerance’ policy, with $450,000 reparations-style payouts,” according to Breitbart.

As reported by Breitbart News:

Biden administration is weighing whether to provide border crossers — who were subjected to the Zero Tolerance policy — with $450,000 each as part of a payout in lawsuits filed.

In some instances, a family unit could secure about $1 million from the payout and overall, the payouts could cost American taxpayers more than $1 billion. Lawyers representing the border crossers have argued that each family unit should get $3.4 million in payouts.

Such payouts would exceed the money that has gone to thousands of American survivors of the 9/11 Islamic terrorist attacks. In 2001, the September 11 Victim Compensation Fund (VCF) was created to compensate Americans who lost loved ones on 9/11 and those who survived the attacks.

In response, Jesse Watters stated as follows during Friday’s airing of The Five:

Biden’s border policy is written by the Babylon Bee. He pays you to break the law, and then he bails you out, remember, if you break the law. Didn’t he also stop building the border wall and then build the border wall around his own house? And then he put the kids in cages — the same cages that he got mad at Trump for putting people in those — happened to be the same cages he built when he was the VP.

And so I think he spies on your bank account if you haven’t broken the law, and then he puts a half a million in your bank account for breaking the law. And then he fires you from work and then pays you not to work. And then he flies illegals into New York in the dead of night… Oh my God, this guy’s already shattered the all-time American record for illegal entries and then you blame Trump for that. Video Below