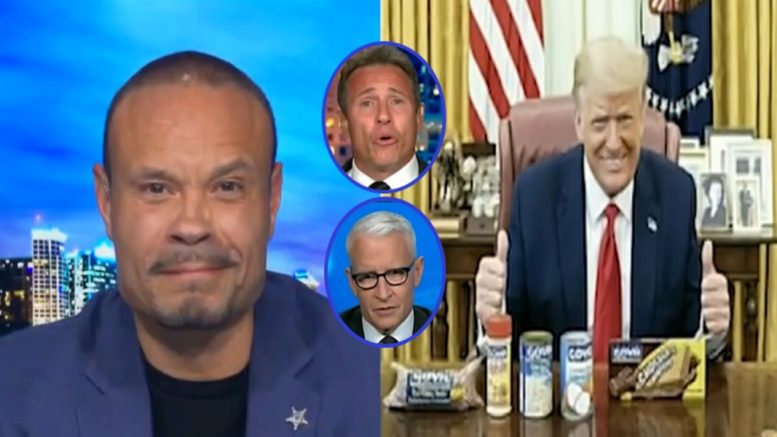 Thursday during Fox News’ airing of “The Five”, former secret service agent Dan Bongino expressed that liberals’ Goya boycott is an “embarrassing failure” and suggested it will result in “a hilarious bust”.

This comes after conservatives and allies of President Trump pledged support for Goya Foods after the company’s CEO sparked backlash with comments praising President Donald Trump.

“We’re all truly blessed … to have a leader, like President Trump, who is a builder,” Robert Unanue said last week during a Rose Garden speech. “We have an incredible builder, and we pray. We pray for our leadership, our president, and we pray for our country, that we will continue to prosper and to grow.”

Unanue’s comments were met with criticism from critics of the president, who called for a nationwide boycott of the company’s products. The CEO, however, said he would not apologize for the remarks.

“So you’re allowed to talk good or to praise one president, but you’re not allowed, when I was called to be part of this commission to aid in economic and educational prosperity and you make a positive comment, all of a sudden, that’s not acceptable,” Unanue said on Fox News following his White House appearance.

“So, you know, I’m not apologizing for saying– and especially if you’re called by the president of the United States, you’re going to say, ‘No, I’m sorry, I’m busy. No thank you.’ I didn’t say that to the Obamas, and I didn’t say that to President Trump,” he added. Continued Below

CNN anchors Chris Cuomo and Anderson Cooper both attacked President Trump for defending Goya Foods. Cooper said: “The president is sitting there behind the resolute desk, resolutely clutching at beans.”

“Remember the Chick-fil-A boycott? You couldn’t get a chicken sandwich for 47 square miles in my neighborhood after the alleged boycott. You can’t find a black beans can anywhere in my local neighborhood after their so-called boycott. But, there’s a reason, and the reason is the liberals allegedly boycotting these– sit in their basements and have no jobs, and watch Teletubby videos all day, unemployed, roasting smores,” Bongino said. Video Below

“So they have no buying power, while conservatives who have jobs, will go out and support people who stand up for the United States. These boycotts are always a hilarious bust. And they’re kind of fun to watch– these idiots implode,” Bongino added.

Later in the segment, Jesse Watters reacted to say: “Trump’s defending Mexican food. Really? CNN’s upset about that? I thought CNN said he hates Mexicans. And now, they’re upset because he’s defending food? Which one is it CNN? And liberals are the ones boycotting Mexican food. It’s like everything’s up and [down]. You can’t make sense of it.”

If you want your beans without a side of racism, try other brands. I am. pic.twitter.com/bnF97knIX6

(Related: Bongino Slams de Blasio & ‘His Brigade Of Buffoons’ Over NYC’s Spike In Crime: “This Guy Is A Nihilist Or Something”)