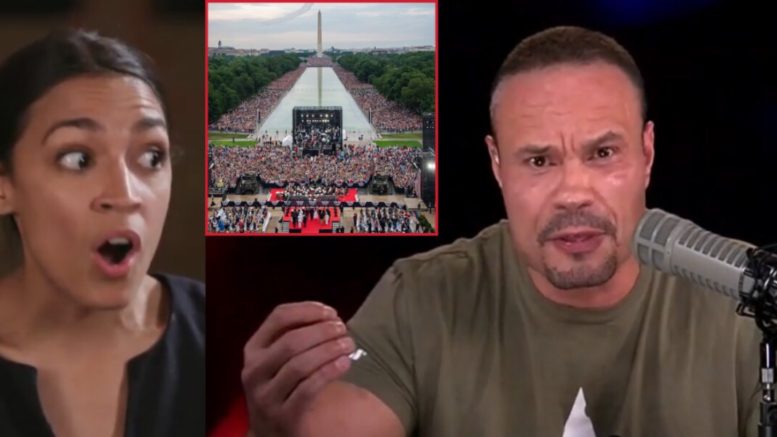 Rep. Alexandria Ocasio-Cortez (D-NY) took to Twitter Friday where she vented her frustration after President Trump held a “Salute to America” in the nation’s capital on Independence Day.

She questioned why a celebration was held when migrant kids are being held “hostage” at the border, along with claiming the successful event as “poorly attended.”

Since she’s in charge, as she has previously claimed, Cortez then asked, “Did he ask Congress for military parade? No. Trump held these kids hostage to secure billions for their abusers. Congress needs to see that.”

In February, Cortez insinuated members of Congress were “in charge” during a recent rant about the disgraced Green New Deal. “Yup. If you don’t like the #GreenNewDeal, then come up with your own ambitious, on-scale proposal to address the global climate crisis. Until then, we’re in charge – and you’re just shouting from the cheap seats,” she wrote on Twitter.

Former Secret Service agent Dan Bongino fired back at Cortez on Friday calling her out for her lies, adding that she’s turned herself into a “punchline.” (Continued Below)

Bongino wrote, “Nobody believes a word you tweet, or a syllable you speak. You lie so often, and with such ease and fluidity, that your words are meaningless. Your tweets only serve as fodder for conservatives to easily rebut. You’ve turned yourself into a punchline.”

Liz Wheeler, host of “Tipping Point” on One American News Network also pushed back at Cortez: “Stop. You voted NO on a $4.5B bill to give emergency humanitarian relief to migrant children in the border detention centers. If you wanted to help the kids, YOU COULD HAVE. But you didn’t.”

Four Democrats opposed the vote — they were all freshmen Democrats, and arguably the highest profile freshmen from the 116th Congress: Reps. Alexandria Ocasio-Cortez, Ilhan Omar, Rashida Tlaib and Ayanna Pressley. All four said earlier in the week they would vote against the bill due to its funding of Immigration and Customs (ICE), which they have called for to be abolished, reported ABC News. (Continued Below)

Stop. You voted NO on a $4.5B bill to give emergency humanitarian relief to migrant children in the border detention centers. If you wanted to help the kids, YOU COULD HAVE. But you didn't.

Several others on Twitter called out Cortez for claiming that the President’s “Salute to America” was “poorly attended.” Here are a few of our favorites:

Scott Presler attended the event where he posted a video showing 1000’s of patriots:

I was there & there were tens of thousands of Americans from all over the country.

MS-13 murdered black Americans on Long Island, right near you, but you won't ever hear @AOC talk about that because illegal aliens come first. pic.twitter.com/6bei317kWa

Caleb Hull asked, “Are you serious?” along with showing another angle:

Brandon Morse chimed in where he said, “Meanwhile, in reality” along with pictures:

We leave you President Trump’s tweet which also clearly displays the crowd size, patriotism, and once again, debunks AOC:

(Related: Lieu, Schiff & Other Dems Bash Trump’s 4th Of July Festivities, Patriots Respond: ‘The Gift Of Trump Is His Ability To Get The Left To Show America Who They REALLY ARE’)