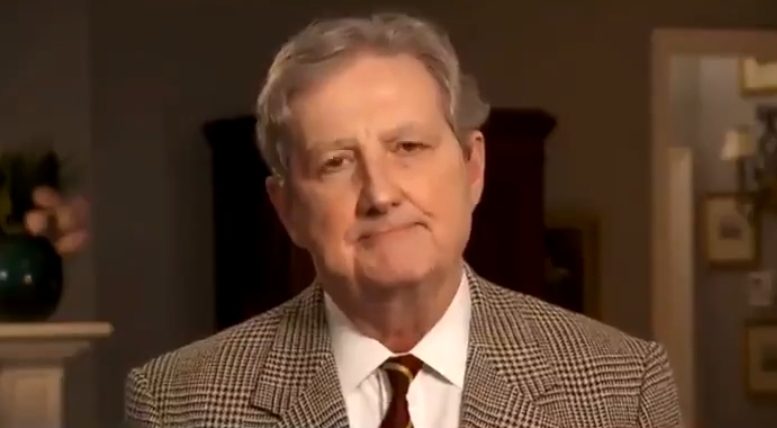 On Monday, Senator John Kennedy (R-LA) slammed leaders who are “using kids as political pawns” to keep schools closed in wake of the cornavirus pandemic.

The Trump Administration at the lead of Education Secretary Betsy DeVos has been pushing for schools to reopen for in-person teaching and “full time” learning, citing the notion that so many kids “fell behind” as a result of the pandemic and will continue to fall behind if things continue as they did at the end of last school year.

Critics of the idea to open schools argue that doing it before the coronavirus is completely under control could increase risk of exposing more people to the virus, which could lead to a bigger problem.

Senator Kennedy told Fox News host Sean Hannity why he believes schools must reopen and he had some choice words for those who are pushing for them to stay closed because “they think it gives them a political advantage.”

“I can promise you for many of our kids, keeping these schools closed is gonna hurt them far much worse than the coronavirus can,” Kennedy said. “France, Germany, Denmark, Austria, Vietnam — even Vietnam has opened their schools, and they’ve done it safe and we can too and we should too.”

“I know some people in good faith disagree with me and I respect that. Let’s have a debate,” he continued. “But there are some people who wanna keep our schools closed because they think it gives them a political advantage. And they’re using our kids as political pawns. And to them I say, unashamedly, they can kiss my ass.”

“That’s wrong to do that to the kids of America — not the people in good faith, but those who are just enjoying the chaos because they think it’s gonna help them in November,” Kennedy concluded. Video Below

.@SenJohnKennedy says there are some people that wants to keep the schools closed because they think it helps them in a political advantage. To those using our kids as a political pawn can kiss my ass! pic.twitter.com/EglVaFYG0i

Sen. Kennedy went on to suggest that those who want schools closed only for political gain “have no soul”. Video Below

The people using our kids like this have no soul. pic.twitter.com/rL6nbDWqai

In ending, we leave you an NBC host’s reaction after top pediatricians openly back schools reopening:

So here we have pediatricians unanimously saying they would “absolutely” send their kids back to school in the fall, “without hesitation.” Stick around for the befuddled anchor’s reaction, “They all said yes.” 🤣🤷🏼‍♂️ pic.twitter.com/cVhg10sItq