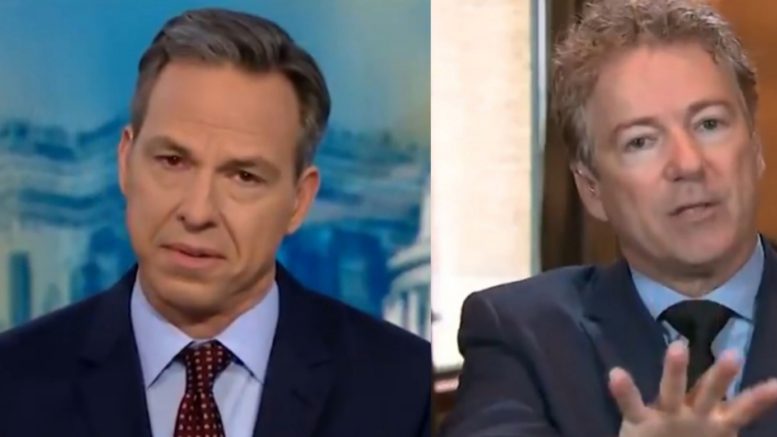 On Sunday, Rand Paul faced off with CNN’s Jake Tapper, where the pair sparred over the topics of President Trump, the Biden family and Ukraine.

Paul said earlier in his interview that he expects all Republicans along with a handful of Democrats will vote against impeaching the President, and all Senate Republicans along with at least two Democrats will vote to acquit Trump. “This is a disagreement over policy and this is sort of an extension of politics, but this isn’t about the Constitution or the president breaking the Constitution,” Rand said.

Tapper then asked Senator Paul: “So just to be clear, this precedent that you are about to set, you would be okay with a President — say Elizabeth Warren asking a foreign government to investigate a Republican rival, as long as there is some sort of allegation about that Republican rival having some sort of connection to allegations of corruption?”

“Well, it’s not,” Rand fired back. “What you said is completely untrue.” Video Below

“Let me finish,” Sen. Paul said. “Here’s the thing is you guys are not being honest with the facts here. He does not call up and say ‘Investigate my rival.’ He says ‘Investigate a person.'”

“If I’m the Republican sheriff here, and my Democrat opponent’s son is caught stealing from a liquor store, am I supposed to say ‘Oh, I’m allowed to investigate corruption unless that person is related to someone who might run against me? So, you cant make rules that way,” Rand continued. “It’s either corruption or it’s not corruption…And I think [Biden] used his office to enrich his son, and I think most Americans agree with us.” Video Below

"you guys [@CNN] are not being honest with the facts here…"

"@JoeBiden used his office to enrich his son". There is nothing wrong to investigate that

Here is the full video of Rand Paul being interviewed by Jake Tapper: