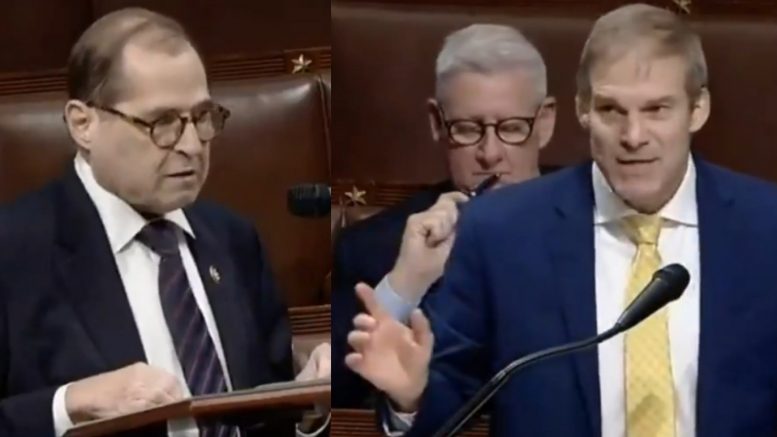 “…Dealing with imaginary things, like Antifa,” were Nadler’s exact words during his speech.

Congressman Jim Jordan (R-OH) wasted no time pouncing on the “scary” notion made by Nadler when given the chance to respond.

“I can’t believe the Chairman of the House Judiciary Committee would utter such a statement on the House floor,” Jordan said in his initial reaction to Nadler’s remark.

“They’re not imaginary. They’re real,” he then declared. “And if you don’t believe me, go talk to… Andy Ngo — the journalist in Portland who was attacked by Antifa, who the President of the United States designated as a terrorist organization, to have the chair of the Judiciary Committee say on the House floor this sentence: ‘Imaginary things like Antifa.'”

“They are far from imaginary,” Jordan continued. “And there are people from every major city in this country who know that, yet the chair of the Judiciary Committee just made that statement. That is scary!” Video Below

The Chairman of the Judiciary Committee just called #Antifa "imaginary."

Ask the journalists they've attacked and the owners of businesses they've destroyed. pic.twitter.com/KE5KdaOKWH

Antifa, the radical-left organization, is believed to have hijacked nationwide George Floyd protests, which spurred into mass chaos and rioting in multiple U.S. cities over the past month.

The group’s actions over time eventually led to President Trump designating them as a “terrorist organization.”

Here is a recent video of Tucker Carlson discussing Antifa:

Tucker says the leaders of Antifa need to be “rounded-up,” put in shackles, then authorities should “frog march them in front of cameras like MS-13” and charge them with terrorism. pic.twitter.com/QVg1KHVPA9