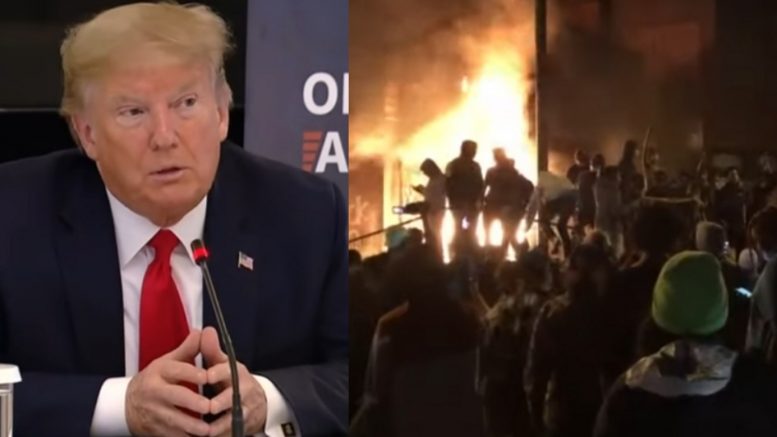 In a set of statements posted on Twitter on Sunday, President Trump said the United States will designate the far-left group Antifa as a ‘terrorist organization’ in wake of nationwide riots following the death of George Floyd.

The Commander-In-Chief also blasted the “Lamestream Media’ for fomenting ‘hatred and anarchy’, and he praised the National Guard for a job well-done after arriving in Minneapolis on Saturday.

Related Article: Trump Reacts To White House Protests: “These Are ‘Organized Groups’ That Have Nothing To Do With George Floyd”

“Congratulations to our National Guard for the great job they did immediately upon arriving in Minneapolis, Minnesota, last night,” Trump tweeted.

“The ANTIFA led anarchists, among others, were shut down quickly,” he added. “Should have been done by Mayor on first night and there would have been no trouble!”

“Other Democrat run Cities and States should look at the total shutdown of Radical Left Anarchists in Minneapolis last night,” Trump said. “The National Guard did a great job, and should be used in other States before it is too late!” See Below

In a seperate tweet, the President declared,” The United States of America will be designating ANTIFA as a Terrorist Organization.”

Trump then took aim at the mainstream media’s ongoing coverage of the nationwide riots, which he claims is only making matters worse.

“The Lamestream Media is doing everything within their power to foment hatred and anarchy,” Trump tweeted. “As long as everybody understands what they are doing, that they are FAKE NEWS and truly bad people with a sick agenda, we can easily work through them to GREATNESS!”

Soon after the President called out Antifa, Donald Trump Jr. put the heat on Joe Biden, Nancy Pelosi and Chuck Schumer, and questioned if they would agree that the far-left organization should be designated as a terrorist group:

Do @JoeBiden, @SpeakerPelosi and @SenSchumer agree with President Trump that ANTIFA is a violent terrorist organization or will they defend and excuse ANTIFA’s long history of violence? https://t.co/nHacgg4LVD

In ending, here is video of Martin Luther King Jr.’s niece, Alveda King, weighing in on the nationwide riots:

Ari Fleischer On COVID-19 Briefings: “Don’t Give Them A Fight, Rise Above” , Hannity Blasts CNN’s Lack Of Coverage