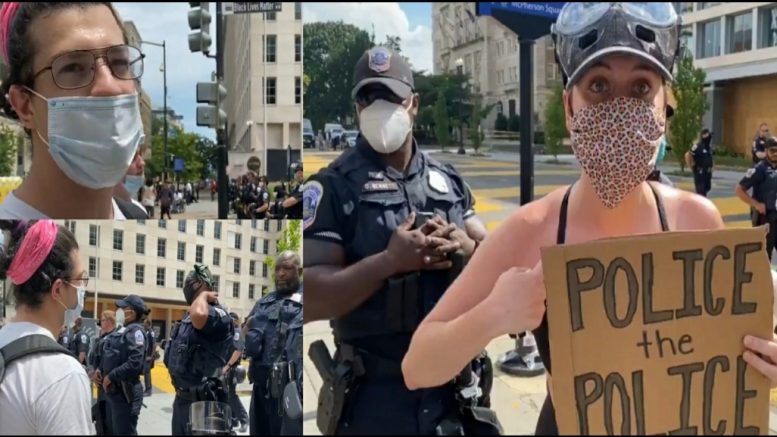 Two protesters got humiliated by a cameraman as they tried lecturing and berating black police officers who were standing guard as chaos erupted in Washington, DC.

Activists attempted to barricade a city block that they dubbed the “Black House Autonomous Zone,” or BHAZ. However, members of law enforcement of the area immediately reacted and regained control.

In one clip that went viral, a white man with a pink bandana questioned why black officers were not doing anything about their fellow officer who was wearing a ‘Blue Lives Matter’ handkerchief as a mask.

“I’m confused why they aren’t doing anything about her wearing the Blue Lives Matter flag,” the protester responds after the cameraman points out all of the officers are black.

“What do you hope to accomplish by yelling at them?” the cameraman asks, to which the protester responds, “I hope she takes her Blue Lives Matter flag sign off. I think that’s extremely disrespectful.”

The protester was then met with blank stares from the officers as he tells him he wishes they would support Black Lives Matter, and the cameran replies “So you’re white and you’re telling the black guy he doesn’t?” Video Below

In a second viral clip, the same cameraman catches a white female protester yelling at black police officers to take off their uniform.

“Are you afraid of police?” the woman shouts at the officers.

The protester then tears into the cameraman after he asked, “You’re white and you’re telling this to black police officers. Do you see a problem with that a bit?”

These same women are going to wonder why they’re single, childless, and depressed at 35pic.twitter.com/DxO5SXwhjd