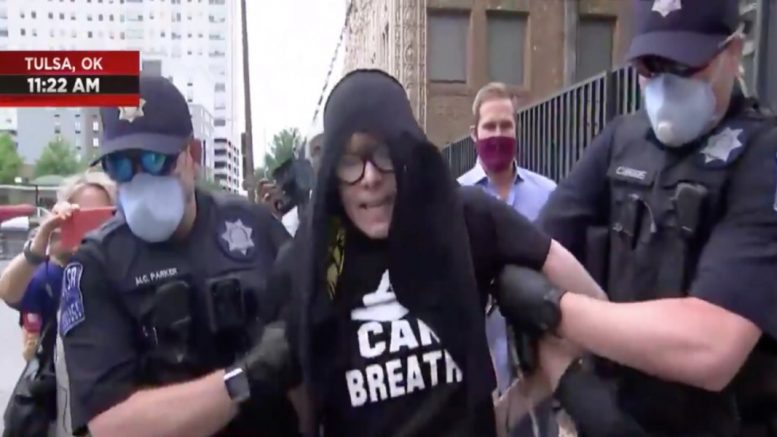 Tulsa Police cuffed and arrested Sheila Buck, a protester who had “passed through the metal detector area to the most secure area of the event accessible only to ticket holders” at the arena where President Trump will be holding a rally in Tulsa, Oklahoma Saturday evening at 8 PM ET.

Buck said that she had a ticket for the Trump rally, and she was dressed in a black “I Can’t Breathe T-shirt”.

An MSNBC reporter was on the scene to capture Sheila Buck getting handcuffed and arrested.

The MSNBC reporter asked Buck as she was being taken away in cuffs: “Ma’am if you can hear me, can you tell me what officers told you that you did wrong?”

“I was trespassing and breaking the law,” she said. “And they’re arresting me. I’ve never been arrested before in my life. … I have a ticket.” Continued Below

When asked by reporters why she came to the president’s rally, she claimed: “Because of this… because of what’s happening. Look at me,” referring to her I can’t breath shirt. “Yeah, they’re arresting me because of this.”

Tulsa PD says the woman in the “I Can’t Breathe” shirt — Sheila Buck — was arrested for obstruction after she refused to the leave premises on her own accord … and after campaign staffers told her to scram, TMZ reported.

The department wrote: “This morning at 11:30 am Tulsa Police were requested by Trump Campaign Staff to remove an individual from the secure area of the rally. Continued Below

For clarification, the arrestee had passed through the metal detector area to the most secure area of the event accessible only to ticket holders.

Whether she had a ticket or not for the event is not a contributing factor for the Tulsa Police in making the arrest. Officers at the location, particularly in the ‘Sterile’ area, will remove individuals only at the direction of Campaign Staff.”

"Somebody has to do this."

A peaceful protester is arrested outside the location President Trump's rally will be held in Tulsa, Oklahoma, on Saturday. pic.twitter.com/Nj23OgyOvX

***UPDATE***
There is some confusion about the area Ms. Buck was arrested.

Ms. Buck was in an area that is considered a private event area and the event organizer, in this case the Trump Campaign, can have people removed at their discretion.