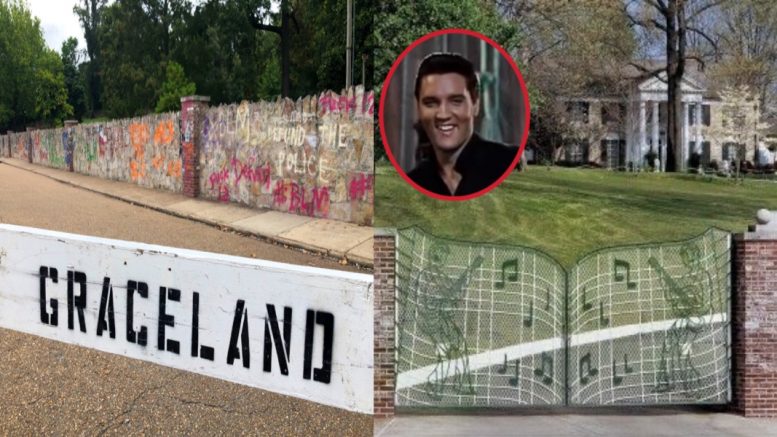 Historic Graceland in Memphis, Tennessee, where the “King of Rock and Roll”, Elvis Presley’s estate is located, was vandalized with graffiti on Sunday, with vulgar phrases such as “BLM”, “abolish ICE”, “f**k Trump”, and “defund the police.”

The graffiti covered up many of the hundreds of tributes left to Elvis Presley from visitors from around the world, which were handwritten by fans on the wall outside of Graceland, over the years.

Memphis Fox 13 reporter Shelia O’Connor tweeted more photographs of the damaged walls on Tuesday morning, saying, “Crews are cleaning up after someone spray-painted the walls of Graceland”.

Crews are cleaning up after someone spray painted the walls of Graceland with messages like “Defund MPD” “Arrest Breonna Taylor’s murderers” and “BLM” and more. I’ll give you a live look on @FOX13Memphis midday. pic.twitter.com/iggrafPLb8 The Levitt Shell is run by a non-profit who tells me they don’t know how they will pay to clean this up.

This is the 6TH TIME they’ve been hit with graffiti during the pandemic and they’re already struggling with an $800k shortfall in the budget due to the pandemic! pic.twitter.com/8bxjYscJdW

The City of Memphis has pitched in and sent two crews to Levitt Shell to use environmentally safe products to remove the graffiti. pic.twitter.com/h54aQnEx13

Bill Stanley, Elvis’ stepbrother, says he’s appalled that someone would deface Elvis’ home. “This is totally uncalled for,” said Stanley. “One of the saddest days of my life. I mean, besides the day that Elvis passed away, this right here is right up next to it,” Memphis’ WMC Action News 5 reported.

Meanwhile, State Rep. Antonio Parkinson, D-Memphis, offered a different take on the graffiti, posting on Facebook: “What’s the real issue here? Every visitor that has come to Graceland has written on that wall and there were no complaints. So, really, it’s WHAT was written, not the fact that it was written.”

Graceland is centered on the life and career of Elvis and annually attracts about 600,000 visitors, including international travelers.