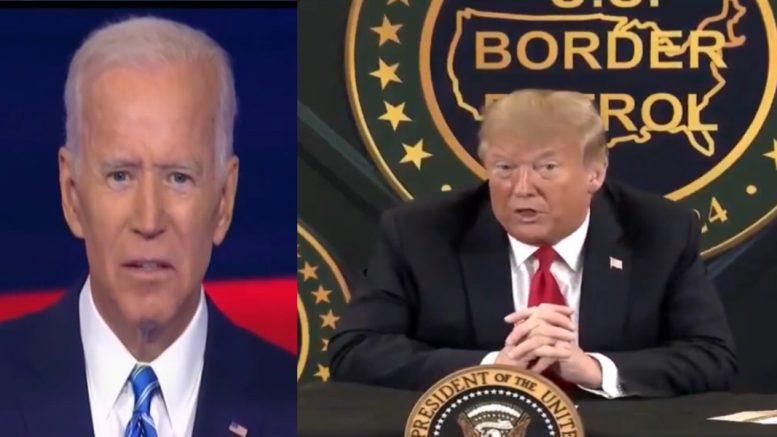 The Commander in Chief held a roundtable event in Arizona on border security Tuesday, as the 200th mile of the wall on the U.S. border with Mexico has been built. He also visited

After the discussion, the president was off to San Luis to “tour the wall and thank border patrol and law enforcement for their tireless efforts” before heading to Phoenix, the White House said.

The president noted during discussions over border security, however, that Joe Biden is “totally controlled by the radical left as you understand.”

“He’s not controlling it, they’re controlling him. They want open borders, they want criminal sanctuaries, they want everything that doesn’t work. I don’t even think it works politically, frankly, at this point,” President Trump explained.

“You see what happened. You take a look at what is happening in Seattle. … Minnesota is such a great state. But you look at Minneapolis and you see what happened there. … We sent in the national guard. As soon as they were there, boom. Shut down,” the president said.

On his website over immigration, Biden says of President Trump securing the border: “His obsession with building a wall does nothing to address security challenges while costing taxpayers billions of dollars. Continued Below

“The challenges we face will not be solved by a constitutionally dubious ‘national emergency’ to build a wall, by separating families, or by denying asylum to people fleeing persecution and violence. Addressing the Trump-created humanitarian crisis at our border, bringing our nation together, reasserting our core values, and reforming our immigration system will require real leadership and real solutions,” according to Biden on his immigration policy.

During a Democratic debate last June, Biden was asked if “someone who is here without documents and that is their only offense, should that person be deported?” Continued Below

“That person should not be the focus of deportation. We should fundamentally change the way we deal with this,” Biden responded. Video Below

Joe Biden also said during a Democratic debate last March that if elected president “in the first 100 days of my administration, no one, no one will be deported at all”.

The former vice president also suggested that he backs sanctuary cities and said that police should not report illegal immigrants arrested by police officers to ICE.

President Trump on Tuesday signed a plaque on the wall commemorating the 200th mile built.