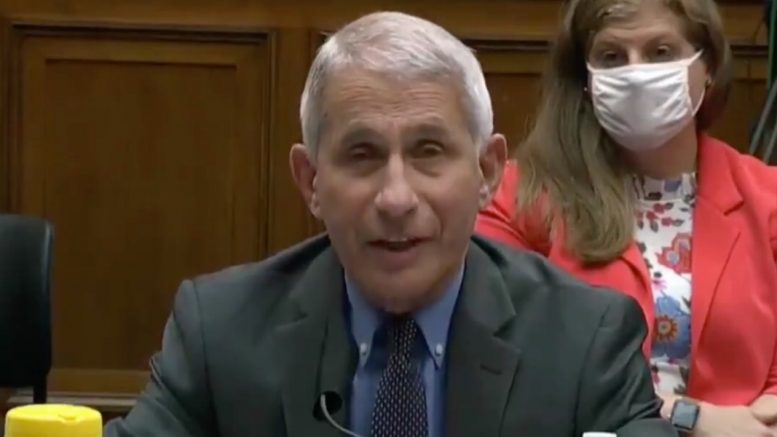 Tuesday during a House Energy and Commerce Committee oversight hearing, Dr. Anthony Fauci, director of the National Institute of Allergy and Infectious Diseases, told lawmakers he was never asked to slow coronavirus testing.

This comes after President Donald Trump said in jest at his weekend rally in Tulsa, Oklahoma that he had asked officials to “slow the testing down”.

“I as a member of the Task Force, and my colleagues on the Task Force– to my knowledge, none of us have ever been told to slow down on testing. That just is a fact,” Dr. Fauci said.

He continued: “In fact, we will be doing more testing. … Not only testing, specificly identify people and identify, isolate contact tracing, but also much more surveillance if you want to get your arms around and understand exactly what’s going on in community spread.”

“So, it’s the opposite. We’re going to be doing more testing, not less,” Dr. Fauci confirmed.

Dr. Anthony Fauci: “to my knowledge, none of us have ever been told to slow down on testing, that just is a fact”https://t.co/f4CqdRHKSz pic.twitter.com/D1DSpe1Btd

President Trump at the Tulsa Rally:

They too confirmed that President Trump has not asked him to slow down testing.

Congressman Greg Walden: "Has President Trump ever directed you to slow down testing for COVID-19 in the United States?"

On Tuesday, President Trump told reporters: “I don’t kid. We have got the greatest testing anywhere in the world. We test better than anyone in the world. Our tests are the best in the world, and we have the most of the them.”

(Related: Dr. Fauci Confirms To Al Sharpton That China Gave The U.S. ‘Misinformation’ On The Coronavirus)

David Hogg: “TikTok Is A Nat’l Security Threat That Should Only Be Used To Call Out The Chinese Government”

Mike Pompeo On Why He Believes Conservatives Should Be ‘Pipehitters’: “These 4 Years Will Test Us. Keep Grinding”