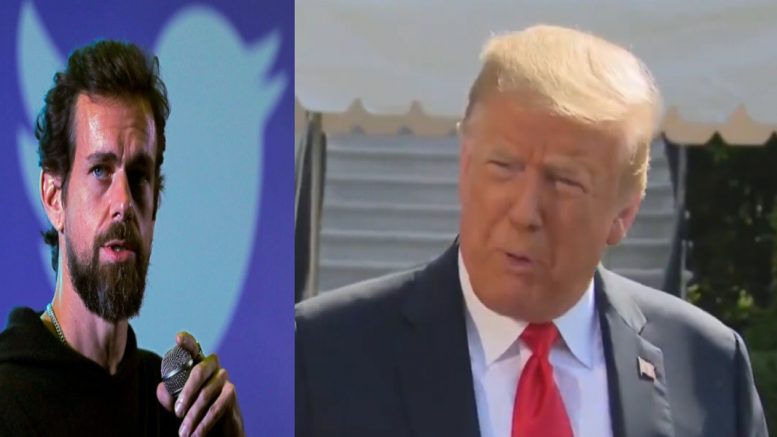 President Donald Trump took to Twitter Tuesday to inform protesters who attempted to establish an “autonomous zone” in the nation’s capital would be met with “serious force” following a night of protests near the White House Monday night.

“There will never be an ‘Autonomous Zone’ in Washington, D.C., as long as I’m your President. If they try they will be met with serious force!” the Commander in Chief warned.

The warning came after tense demonstrations on Monday night where protesters attempted to tear down a statue of Andrew Jackson in Lafayette Square Park and who targeted the nearby St. John’s Episcopal Church once again.

Law enforcement intervened, deploying pepper spray and using force to disperse the protest before the statue could be pulled down.

Fox 5 DC reported that protesters spray-painted “BHAZ” on the columns of St. John’s Church, which was apparently a reference to a “Black House Autonomous Zone.”  The news station reported that U.S. Park Police and city police managed to close the area off to protesters. 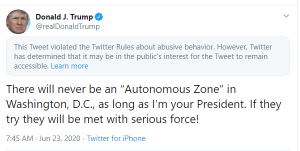 BHAZ — Black House Autonomous Zone — has been spray painted on the columns of the historic St. John’s church outside the White House. pic.twitter.com/or2C2myVSX

BREAKING:
Washington BLM trying to set up a “Black House autonomous zone” outside the White house… vandalising the historic St Johns church with BHAZ graffiti and trying to take down a statue of Andrew Johnson…. this is not peaceful protest folks, no matter how you skew it. pic.twitter.com/nGDhhDtaya

If they can't comprehend basic physics, it's a safe bet they don't even know who he is, let alone anything about our country's historypic.twitter.com/vhO5H86EYf

(Related: Trump On Vandalizing Statues: “We Are Looking At Long Term Jail Sentences For These Vandals, Hoodlums, Anarchists, Agitators”

In His Debut Back To Social Media, Kanye Drops A MAGA MOAB On All Of His Fans: ‘I’m Performing With My [Bleep]-ing Hat!’