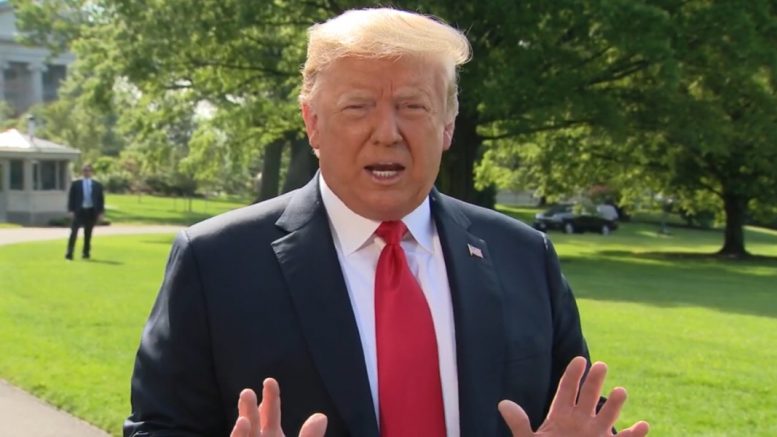 President Trump took to Twitter Monday night to announce that “numerous people were arrested” in Washington, D.C., as protesters attempted to tear down a statue of Andrew Jackson in Lafayette Square Park and targeted the nearby St. John’s Episcopal Church once again.

“Numerous people arrested in D.C. for the disgraceful vandalism, in Lafayette Park, of the magnificent Statue of Andrew Jackson, in addition to the exterior defacing of St. John’s Church across the street. 10 years in prison under the Veteran’s Memorial Preservation Act. Beware!” the Commander in Chief tweeted.

On Tuesday morning, the President also tweeted: “I have authorized the Federal Government to arrest anyone who vandalizes or destroys any monument, statue or other such Federal property in the U.S. with up to 10 years in prison, per the Veteran’s Memorial Preservation Act, or such other laws that may be pertinent.”

“This action is taken effective immediately, but may also be used retroactively for destruction or vandalism already caused. There will be no exceptions!” he declared. “There will never be an “Autonomous Zone” in Washington, D.C., as long as I’m your President. If they try they will be met with serious force!”

Fox News reported, the full extent of the damage is not yet clear. The Lincoln Memorial and WWII Memorial had been defaced in earlier protests, and on Monday night, the Jackson statue was also defaced. Reuters reported that “killer scum” was written on the pedestal. Ropes were tied to the statue in an effort to topple it, but the statement said “law enforcement officers ensured that this would not happen.”

Fox 5 DC reported that protesters spray-painted “BHAZ” on the columns of St. John’s Church, which was apparently a reference to a “Black Autonomous Zone.”  The news station reported that U.S. Park Police and city police managed to close the area off to protesters. Continued Below

Before departing to Arizona Tuesday, the Commander in Chief told reporters “long-term jail sentences” will be issued for vandalizing statues.

“Last night we stopped an attack on a great monument of Andrew Jackson in Lafayette Park. I just want to thank law enforcement for the great job working very closely with the White House and secret service and some of our executives. …. Numerous people are in jail and are going to jail today– people are already there, but we are looking at long term sentences under the act. We have a very specific Monuments Act,” the president warned.

“We are looking at long term jail sentences for these vandals, hoodlums, and anarchists, agitators– call ’em whatever you’d like, whatever you want. Some people don’t like that language, but that’s what they are. They’re bad people; they don’t love our country. And they are not taking down our monuments. I just want to make that clear,” he emphasized. Video Below

The Commander in Chief also told reporters Tuesday that he will issue an executive order to protect monuments around the country in a “more uniformed way”.

If they can't comprehend basic physics, it's a safe bet they don't even know who he is, let alone anything about our country's historypic.twitter.com/vhO5H86EYf

Protesters and police actively fighting with each other. Protesters weren’t able to tear down the statue of President Andrew Jackson (police have pushed them back) pic.twitter.com/uXR3FZFjUB

And, by the way, criminal masterminds, you’re destroying a statue on federal property that commemorates the military service of Andrew Jackson, a crime that carries a 10-year sentence under the Veterans Memorial Preservation and Recognition Act. And you’re on tape.