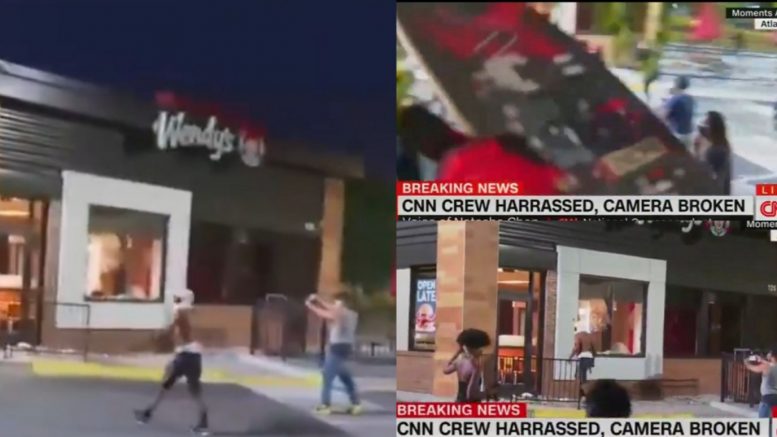 Members of CNN’s news crew were assaulted during a protest that took place at an Atlanta Wendy’s on Saturday night.

The Wendy’s, which was ultimately burned to the ground by demonstators, is the same location where Rayshard Brooks was shot and killed by police after Brooks grabbed an officer’s taser and ran with it while he was being arrested.

CNN’s crew were filming the Atlanta Wendy’s being destroyed, when all of a sudden angry protestors tried to block them from taking footage.

Moments later, an object that appears to be a skateboard is seen coming directly at the camera, which then got broken.

The correspondent who was at the scene, Natasha Chen, described the altercation once her crew got out of the area and to a safe location. Video Below

A CNN news crew was assaulted by Antifa in Atlanta. You won’t see this getting too much coverage. pic.twitter.com/s7RdNsM74N

Here is some more footage of some of the mayhem that took place during Saturday night’s protests in Atlanta:

The Wendys where Atlanta police shot and killed 27-year-old Rayshard Brooks was set on fire by protesters
pic.twitter.com/7ktgKMtUZY

There goes @Wendys on University Ave.

I had to step away for my own safety but here is a look at rioters right before they lit a firework in the Wendy’s where #atlantapolice shot and killed #RayshardBrooks @FOX5Atlanta pic.twitter.com/rR0XdDkaBk

Atlanta: Wendy’s on University Ave. on fire as protests have taken over the interstate in response to the killing of Rayshard Brooks by police on Friday.