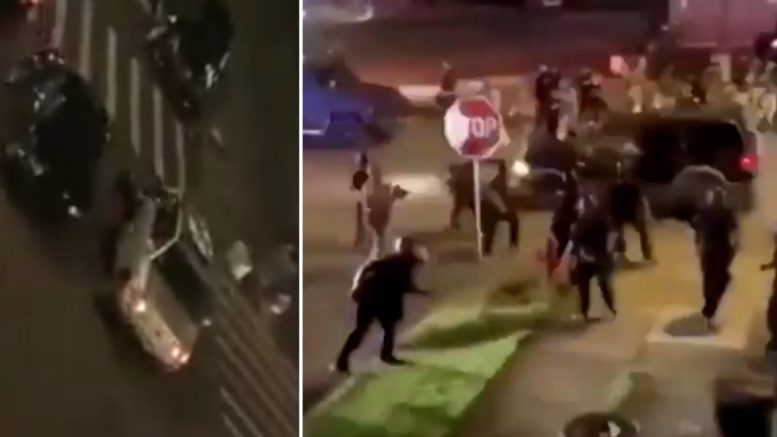 Domestic terrorists appear to be shifting to using automobiles in their violent acts against police officers — at least, that appears to be the case in New York.

In one video posted to social media, a dark-colored SUV is seen plowing into and running over a group of officers who were blocking off an intersection in Buffalo, New York, before speeding away.

A car just rammed into and ran over a large group of police officers in NY. This is domestic terrorism. Everyone who has encouraged this terrorism should feel deep sense of shame for how they‘ve encouraged all of this.

Please pray for the officers. 💔https://t.co/Oe1nTajtpU

Two officers were reportedly run over by the SUV and were taken to the local hospital, where they are listed in stable condition.

In a seperate incident, another video showed a car ramming a police officer, who was then hit by another car before landing on the ground. Both cars sped away.

Now in another part of NY ANOTHER officer has been rammed into by a car. THIS TERRORISM MUST END NOW! pic.twitter.com/12NN22atAh

As reported by Fox News, “NYPD officials confirmed that the victim is an NYPD sergeant who was later taken to a hospital, where he was said to be in serious but stable condition with unspecified injuries.”

The two incidents come as law enforcement across America have been working around the clock to tame down mass rioting and looting, which was ignited last week by the death of Minneapolis resident George Floyd.

Related Article: Texas Homeless Veteran Tears Into Rioters After They Burn His Bed: “What The F— Are You Doing?!”