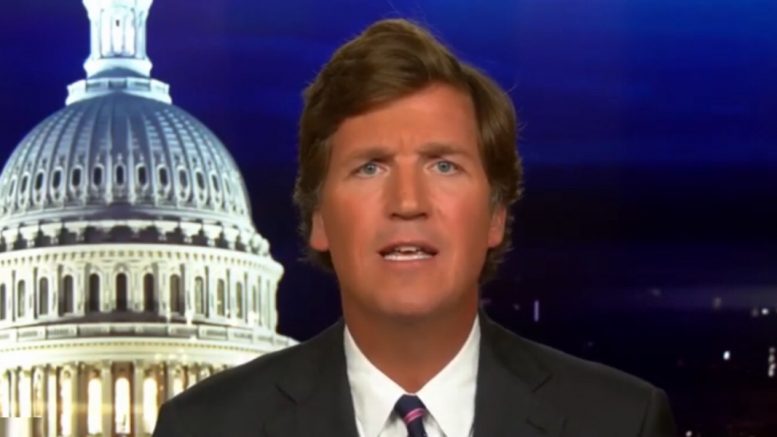 Fox News’ Tucker Carlson is facing backlash from advertisers this week after he argued on his show Monday night: “This may be a lot of things, this moment we’re living through, but it is definitely not about black lives. Remember that when they come for you, and at this rate, they will.”

As reported by People:

During Monday’s broadcast of Tucker Carlson Tonight, Carlson criticized the Black Lives Matter movement, saying, “This may be a lot of things, this moment we are living through. But it is definitely not about black lives, and remember that when they come for you, and at this rate, they will.”

A Fox News spokesperson clarified earlier this week that Tucker was referring to Democratic leaders, not protestors.

Carlson, who referred to the ongoing protests as the “Black Lives Matter riots,” added, “You’re not allowed to question Black Lives Matter in any way. Full stop. That rule has been enforced without mercy everywhere.” Continued Below

T-Mobile confirmed it had pulled its ads from Tucker Carlson’s show on Twitter, saying: “We haven’t run ads on Tucker Carlson Tonight since early May and have cancelled all future placements,” the company tweeted. “We will continue to support those who stand against racial injustice.”

He added: “As I listen to the life experiences of some of @TMobile’s African-American team members, I can’t imagine hearing them and not being personally moved. I come away each time reminded of my responsibility to drive change right now, to make T-Mobile a better place to work for all.” Continued Below

Papa John’s said in an emailed statement to Bloomberg that it will no longer advertise on any opinion-based programming: “Placement of advertising is not intended to be an endorsement of any specific programming or commentary,” the pizza company said.

An ABC spokesperson told Deadline, “The ABC advertisements were placed on the show without our knowledge by third party media buyers who were unaware that we do not advertise on the show, and they have now been notified not to place any further ads.”

Tucker Carlson: "This may be a lot of things, this moment we are living through, but it is definitely not about black lives and remember that when they come for you, and at this rate, they will." pic.twitter.com/HMP3q8WgbQ

Later in thew week, Tucker Carlson said he “won’t bow to the mob”:

"Since the day we went on the air they’ve been working hard to kill this show… we will NEVER bow to the mob EVER no matter what" pic.twitter.com/3pc4Z2BjZz

#TuckerCarlson is a true essayist and they are terrified of him. https://t.co/vBK7je2vTl

What is being done to @TuckerCarlson is nothing short of digital terrorism.

It's not enough that the left owns 99% of the TV networks, news outlets, and are in bed with big tech…

They need to silence EVERY effective voice that speaks the Truth.#IStandWithTuckerCarlson #4EVA

The fact #IStandWithTuckerCarlson is even needed/trending as a hashtag tells you everything you need to know about leftist cancel culture.

Hell yeah. He’s popular in Canada too and people there stand with him. #IStandWithTuckerCarlson

RT if you stand with Tucker Carlson against the leftist MOB trying to cancel his show!

We have to stand strong with the people who the Left wants to destroy. #IStandWithTuckerCarlson

Never bow to the mob. Ever.#IStandWithTuckerCarlson

Thanks Tucker, for always being a voice of reason and standing firm against the mob. #IStandWithTuckerCarlson #factsdontcareaboutyourfeelings pic.twitter.com/x2MMbUuWct

.@Disney joins war on American rule of law but is happy to businees with Chinese communists? https://t.co/Dh0H1J0VIq